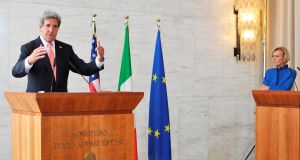 The United States does not want Russia to sell weapons to Syria and has opposed transfers of missile systems to the country in the past because of the threat to Israel, US secretary of state John Kerry has said.

Mr Kerry did not directly respond to a newspaper report saying Russia was poised to sell new advanced ground-to-air missiles to the Syrian government, apparently worried it might undercut a diplomatic effort to end the two-year-long civil war.

Asked about the report, Mr Kerry said the United States has opposed arms deals in the past.

“I think we have made it crystal clear we would prefer that Russia was not supplying assistance,” Mr Kerry said at a news conference after meeting Italian foreign minister Emma Bonino.

The Wall Street Journal had reported that Israel had informed the United States a Russian deal is imminent to sell advanced ground-to-air missiles that would significantly boost Syria’s ability to stave off intervention in the conflict.

The newspaper quoted US officials as saying they were analysing the information, but would not comment on whether they believed the sale of S-300 missile batteries was near.

Pressed about the report, Mr Kerry suggested he may have raised the issue with Russian president Vladimir Putin and foreign minister Sergey Lavrov, whom he met in Moscow on Tuesday.

After those meetings, the two countries agreed to seek new peace talks to end the conflict.

“That would be counterproductive to what we are trying to accomplish,” he added.

“We are aware of the reports. But I have no further information for you on it. We have consistently called on Russia to cut off the Assad regime’s supply of Russian weapons, including air defence systems that are destabilising to the region,” White House spokesman Jay Carney told reporters aboard Air Force One as US president Barack Obama headed to Texas.

Today, Mr Kerry said the United States was grateful to Russia for its willingness to work with the United States to try to bring the Syrian government and rebels seeking to topple it to an international conference to negotiate an end to the war.

He suggested the meeting could take place in Geneva, where Moscow and Washington last year agreed on a framework to try to end the war by creating a transitional government in Syria, but diplomacy has foundered since.

“If the aim of your attack was to prevent the strengthening of the resistance’s capabilities, then Syria will give the resistance sophisticated weapons the like of which it hasn’t seen before,” he said in a televised speech today.

Israel launched a series of raids near the Syrian capital last Friday and followed up with air strikes early on Sunday morning that shook the city and lit up the horizon.

Western and Israeli sources said its aim was to take out “game-changing” Iranian missiles destined for Lebanon’s Shi’ite group Hizbullah, which fought a war with Israel in 2006 and is a staunch ally of Syrian President Bashar al-Assad.