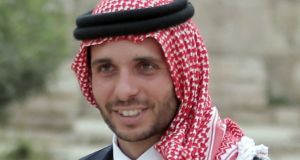 Former crown prince Hamzah bin Hussein has deepened the unprecedented rift in Jordan’s ruling family by rejecting a military order to remain under house arrest and refrain from communicating with outsiders.

In a statement released by government critics, he said, “I am going to escalate and won’t obey when they tell you you cannot go out or tweet or reach out to people and are only allowed to see family.”

The prince (41) has been confined to his home since Saturday and accused of participating in a foreign-inspired plot to undermine the “security and stability” of the kingdom. He had raised the suspicions of the country’s security forces by taking part in meetings where tribesmen belonging to the Herak democratic movement have criticised the king. Herak, which participated heavily in 2011 Arab Spring protests in Jordan, consists of tribes which have been mainstays of the monarchy and the loyalist army.

Among those detained are Yasser al-Majali who heads Hamzah’s office and Sheikh Samir al-Majali, a prominent businessman. Members of the Majali clan, based in the town of Karak, have long assumed senior positions in both the government and military. Last December the former labour minister and son of an ex-premier, Amjad Hazza al Majali, demanded the king return “stolen” land and money to the people and put an end to corruption in his entourage.

The prince said he had been listening to their complaints rather than contributing to discussions. Without referencing the king, he fired a broadside at the “ruling system” for deciding “its personal interests, that its financial interests, that its corruption is more important than the lives and dignity of futures of 10 million people that live here”.

This is a particularly tricky issue as lèse-majesté is a crime in Jordan where his half-brother, King Abdullah (59), has reigned since the 1999 death of their father, King Hussein. Although he named Hamzah crown prince, in 2004 Abdullah appointed his own son, Hussein, as his successor.

In 2016, the king amended the constitution to concentrate power in the hands of the monarch who cannot legally or politically be held accountable and transformed Jordan’s parliamentary system into a constitutional monarchical/parliamentary model of governance in which he holds the levers of power.

Hamzah has denied taking part in a conspiracy or planning to destabilise the kingdom, regarded in the West as an island of stability in a turbulent regional sea. While Jordan could erupt in unrest, a coup against King Abdullah would be impossible as long as he retains the support of the military, the middle class and powerful business interests although Jordanians at all levels of society agree with the dissidents’ demands.

As Jordan will mark the 100th anniversary of its founding on April 11th, the Herak movement might have been planning fresh demonstrations against mismanagement, corruption and nepotism on that occasion. Instead of regime change, Herak’s aim is changing the way the country is run. Herak sought to enlist Prince Hamzah, who looks very much like his respected father, is modest, religious and popular. He also came out publicly in 2018 to criticise the government over a hugely unpopular tax law.

Both the monarchy and the current government are determined to avoid fresh protests and are ready to take tough action against anyone planning demonstrations. The country has had seven prime ministers since 2011, several dismissed by protests and strikes against punitive austerity.

Jordan no longer attracts the largesse of Saudi Arabia and the Gulf states which, for decades, kept the resource-poor kingdom afloat. The country has been under strain for more than a decade due to the influx of Syrian refugees and an economic growth rate which cannot keep up with the increase in the Jordanian population. Covid lockdowns and demands on finances led to a 5.5 per cent contraction in 2020 although the economy is expected to rebound this year if the pandemic is contained.

The unemployment rate is 24.7 per cent while the poverty rate – 11 per cent in the capital, Amman, to 27 per cent in rural areas – could rise in the short run. Sources in Amman told The Irish Times that many businesses have closed, others are not paying salaries, and food prices are rising. Covid infections are soaring and repeated lockdowns are preventing recovery.

In addition to tens of thousands of settled Iraqis and Palestinians, Jordan hosts 1.3 million Syrian refugees who tax the desert kingdom’s slender water resources and health and educational systems and threaten the fragile natural environment. Although half the Syrians are registered to receive UN humanitarian assistance, 87 per cent are below the poverty line.

In denial about the dire situation in the kingdom, the authorities have risked a major royal rupture and a tribal backlash by placing Prince Hamzah under house arrest and accusing him of involvement in a foreign plot – a ploy all too often used by regional regimes under challenge.