Secretary of state thanks Iran for co-operation, as Joe Biden says no apology was made

Iran releases 10 U.S. sailors after holding them overnight, bringing a swift end to an incident that had rattled nerves days ahead of the expected implementation of a landmark nuclear accord between Tehran and world powers. Video: Reuters 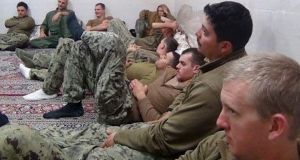 US sailors in captivity in an undisclosed location in Iran in a handout picture released on Farsnews website on Wednesday. The sailors were later released “after they apologised” for inadvertently entering Iranian waters, said Iran. Photograph: farsnews.com/Reuters

Iran released 10 US sailors on Wednesday after holding them overnight, bringing a swift end to an incident that had rattled nerves days ahead of the expected implementation of a landmark nuclear accord between Tehran and world powers.

Iran’s Islamic Revolutionary Guards said they had freed the sailors after determining they had entered Iranian territorial waters by mistake. The sailors had been detained aboard two US navy patrol boats in the Gulf on Tuesday.

“Our technical investigations showed the two U.S. Navy boats entered Iranian territorial waters inadvertently,” the Guards said in a statement carried by state television. “They were released in international waters after they apologised,” it added.

Rear Admiral Ali Fadavi had earlier said that the two US navy boats entered Iranian territorial waters due to a broken navigation system.

US vice-president Joe Biden on Wednesday rejected reports that Washington had offered Iran an apology over the incident and said it was dealt with as “ordinary nations” would handle such an event.

“That’s why it’s important to have channels open,” Mr Biden said on CBS’s This Morning programme. “No, there was no apology, nothing to apologise for . . . and there’s no looking for any apology. This was just standard nautical process.”

The sailors were later taken ashore by US navy aircraft, while other sailors took charge of the boats and headed towards Bahrain, their original destination.

US defence secretary Ash Carter said he was pleased the sailors had been freed and appreciated “the timely way in which this situation was resolved”. He added: “I want to personally thank secretary of state John Kerry for his diplomatic engagement with Iran to secure our sailors’ swift return.”

Mr Kerry thanked Iran for its co-operation in the release of the sailors, adding: “That this issue was resolved peacefully and efficiently is a testament to the critical role diplomacy plays in keeping our country safe, secure, and strong.”

Iranian foreign minister Mohammad Javad Zarif said on his Twitter account on Wednesday that he was “happy to see dialogue and respect, not threats and impetuousness, swiftly resolved the sailors episode”.

The incident raised tensions between Iran and the United States, which, along with other world powers, reached a deal last year under which Iran will curb its nuclear activities in exchange for the lifting of economic sanctions.

Some conservatives in both countries, enemies since Iran’s 1979 Islamic revolution, have criticised the deal that is due to be implemented in the coming days.

Iran’s armed forces chief, Major General Hassan Firouzabadi, said the incident should demonstrate Iranian strength to “troublemakers” in the US Congress, which has sought to put pressure on Iran after the nuclear deal.

At a presidential campaign rally in the United States, Republican frontrunner Donald Trump, who accuses President Barack Obama of being weak on foreign policy, described the detention of the sailors as “an indication of where the hell we’re going”.