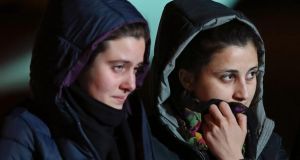 The women, Greta Ramelli and Vanessa Marzullo, believed to have been seized in July or August by the Nusra Front, an affiliate of al-Qaeda, were among a number of Westerners in Syria who have been abducted by Nusra and the Islamic State militant group.

The Islamic State has beheaded at least five Western captives, including three Americans.

It was not immediately clear why Ramelli and Marzullo were released or precisely how they were returning home. Italian news media said the women, believed to be in their 20s, were in Turkey and would fly to Italy on Friday.

“Greta Ramelli and Vanessa Marzullo are free, they will soon be back in Italy,” Prime Minister Matteo Renzi’s office said in a Twitter message.

Italy’s Lower House members started clapping as the minister of constitutional reforms, Maria Elena Boschi, announced that the two young women, whom she identified by their first names, had been released.

The Italian government said in August that the women had been providing health care services in the northern Syrian city of Aleppo when they were abducted.

Italian newspapers reported conflicting accounts of the abduction, suggesting that they had been taken by different groups. In an interview with Corriere della Sera, a leading Italian daily, a co-worker of the abducted women said they had been to Syria previously and were not unprepared for such situations.

In a YouTube video apparently produced by their captors in mid-December and released a few weeks ago, the women said their lives were in danger and implored the Italian government to take action to rescue them.

“We are Greta Ramelli and Vanessa Marzullo,” Ramelli read from a written statement in English.