US secretary of state John Kerry speaks on the phone to Israeli prime minister Benjamin Netanyahu about the terms of a ceasefire in Israel’s fight against Islamist militants in Gaza, from his hotel suite in Cairo today. Photograph: Reuters 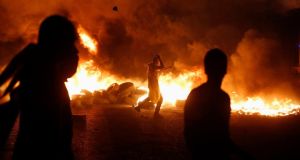 A Palestinian protester uses a slingshot to hurl stones toward Israeli troops during clashes, at a protest against Israeli offensive in Gaza. Photograph: Mohamad Torokman /Reuters Smoke rises after an Israeli air strikes in the Al Shejaeiya neighbourhood during a military operation in the east Gaza City today. Photograph: Mohammed Saber/EPA

Israel has rejected international proposals for a ceasefire in its fight against Islamist militants in Gaza, a government source has said, but US secretary of state John Kerry said no formal proposals had yet been put forward.

Mediators hope that a truce could come into force ahead of a Muslim festival that starts early next week, but they have struggled to resolve seemingly irreconcilable demands from Israel and Hamas-led fighters, locked in conflict since July 8th.

As diplomacy faltered, the fighting raged on.

Gaza officials said Israeli strikes killed 55 people today, including the head of media operations for Hamas ally Islamic Jihad and his son. They put the number of Palestinian deaths in 18 days of conflict at 844, most of them civilians.

Militants fired a barrage of rockets out of Gaza, triggering sirens across much of southern and central Israel, including at the country’s main airport. No injuries were reported, with the Iron Dome interceptor system knocking out many of the missiles.

Speaking in Cairo, Mr Kerry told reporters that, although Israel may have rejected some language in a truce proposal draft, there “was no formal proposal, or final proposal, or proposal ready (for) a vote submitted to Israel”.

The top US diplomat said there were still disagreements on the terminology, but he was confident there was a framework that would ultimately succeed and that "serious progress” had been made, although there was more work to do.

The search for a breakthrough will continue in Paris tomorrow when France hosts diplomats from the United States, Britain, Germany, Italy, the European Union, Turkey and Qatar, a French diplomatic source said.

“We are working toward a brief seven days of peace. Seven days of a humanitarian ceasefire in honour of Eid in order to be able to bring people together to try to work to create a more durable, sustainable ceasefire for the long (term),” Mr Kerry said.

UN secretary-general Ban Ki-moon, speaking at the same news conference, threw his weight behind a seven-day humanitarian truce, saying it could start with an extendable 12-hour stoppage.

A US official said later that Israeli prime minister Benjamin Netanyahu told Kerry Israel would begin a 12-hour pause in Gaza hostilities starting at 7 am Israeli time (4am GMT) tomorrow. Israel did not comment on the report.

Hamas, which wants an end to an Israeli-Egyptian blockade of Gaza before agreeing to halt hostilities, has yet to respond to the ceasefire proposition, which has not been made public.

The Israeli source, who declined to be named, said Mr Netanyahu’s security cabinet had turned down the plan because it did not let Israel carry on hunting down Hamas’s tunnel network that criss-crosses the Gaza border.

"Kerry’s proposal leans (too much) towards Hamas’s demands,” said the source.

The Gaza turmoil has stoked tensions in the nearby occupied West Bank, where US-backed Palestinian president Mahmoud Abbas governs in uneasy coordination with Israel.

Medics said six Palestinians were killed in separate incidents near the cities of Nablus and Hebron, including one shooting that witnesses blamed on an apparent Jewish settler.

Last night, 10,000 demonstrators marched in solidarity with Gaza near the Palestinian administrative capital Ramallah - a scale recalling mass revolts of the past.

Protesters surged against an Israeli army checkpoint, throwing rocks and Molotov cocktails, and Palestinian medics said one was shot dead and 200 wounded when troops opened fire.

Israel said three more of its soldiers were killed in Gaza today, bringing the army death toll to 35, as troops battled militants in the north, east and south of Gaza - a tiny Mediterranean enclave that is home to 1.8 million Palestinians.

It also announced that a soldier unaccounted for after an ambush in Gaza six days ago was definitely dead, although his body had not been recovered. Hamas said on Sunday it had captured the man, but did not release a photograph of him.

Three civilians have also been killed in Israel by rockets from Gaza - the kind of attack that surged last month amid Hamas anger at a crackdown on its activists in the West Bank, prompting the July 8th launch of the Israeli offensive.

The growing Israeli casualty list has only strengthened resolve in the country to pursue this latest campaign against Hamas until the group is significantly weakened.

Mr Kerry, based in neighbouring Egypt for much of the week, is seeking a limited humanitarian truce under which Palestinian movement would be freed up to allow in aid and for the dead and wounded to be recovered.

A Palestinian official close to the negotiations said Turkey and Qatar had proposed a seven-day halt to the fighting, which had been relayed to Israel by Kerry while Hamas considered it.

Israel insisted that, even if such a ceasefire was agreed, its army should continue destroying tunnels along Gaza's eastern frontier, a mission that could take between one and two weeks. A senior Israeli officer said troops had made progress.

“We have managed to locate and destroy about half, at least half, of the enemy’s attack tunnels and we are continuing with determination,” said Major-General Sammy Turgeman, the head of the army’s southern command.

“Every additional day’s fighting will allow us to continue to damage this infrastructure more and more,” he added.

Mr Netanyahu has said a truce should also lead to the eventual stripping of Gaza’s rocket arsenals - something Hamas rules out.

“We must stop the rocket launches. How this is done - whether through occupying (Gaza), or broadening (the operation), or (international) guarantees, or anything else, I have to see it with my own eyes,” said police minister Yitzhak Aharonovitch.

The rockets have sent Israelis regularly rushing to shelters and dented the economy despite Iron Dome’s high rate of success.

Jolted by the blow at the height of an already stagnant summer tourism season, Israel persuaded US authorities to lift the flight ban yesterday, after which the European aviation regulator removed its own advisory against flying to Ben Gurion.

In the second such salvo in as many days, Hamas said it fired three rockets at the airport on Friday, an apparent bid to cripple operations there again. There was no word of impacts at Ben Gurion, whose passenger hall emptied at the sound of sirens.

Hamas leader Khaled Meshaal had on Wednesday voiced support for a humanitarian truce, but only if Israel eased restrictions on Gaza. Hamas wants Egypt to open up its border with Gaza, too, and demands that Israel release hundreds of prisoners rounded up in the West Bank last month following the kidnap and killing of three Jewish seminary students.

Such concessions appear unlikely, however, as both Israel and Egypt consider Hamas a security threat.

One Cairo official said next week's Eid al-Fitr festival, which concludes Ramadan, was a possible date for a truce. It was not immediately clear if Kerry, whose mediation has involved Egypt, Turkey, Qatar and Abbas, would remain in Cairo.

Yesterday, a US official said Kerry would not stay in the region “for an indefinite amount of time".

More than 160,000 Palestinians have been displaced in Gaza by the fighting, many of them seeking shelter in buildings run by the United Nations Relief and Works Agency (UNRWA).

The World Health Organisation (WHO) called today for a humanitarian corridor to be set up in Gaza to allow aid workers to evacuate the wounded and bring in life-saving medicines.

“People are dying at an alarming rate, being injured at a very alarming rate," Jens Laerke of the UN Office for the Coordination of Humanitarian Affairs (OCHA) told reporters.