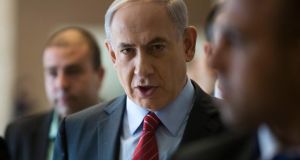 The leaders of Israel’s coalition parties have agreed that elections will be held on March 17th and the mudslinging has already begun in what is expected to be a dirty campaign.

The tone was set by prime minister Binyamin Netanyahu when he dismissed two senior centrist coalition partners, Yair Lapid, head of Yesh Atid and Hatnua leader Tzipi Livni, accusing them of orchestrating a putsch against him. Yesterday he declared the elections were over one question: who will lead the country.

No one really wants these elections, which will take place just over two years after the previous poll.

In the decades after independence in 1948 Israel was dominated by the socialist Labour party, with the Likud forming the main right-wing opposition. The March election will be fought out by a number of medium-sized parties.

The right-wing religious bloc has a clear advantage, reflecting that Israel has shifted to the right in the past few decades. Polls also show a high percentage of first-time voters supporting right or far-right parties.

Demographics also plays a part as the ultra-Orthodox, religious and settler communities increase the size of the overall population with every election.

Netanyahu remains the most popular choice for prime minister helped by the lack of an experienced and charismatic candidate from the left-centre bloc. However, his popularity has declined sharply from 77 per cent in August, during the Gaza war, to 38 per cent.

Barack Obama and Netanyahu are barely on speaking terms and European parliaments are lining up to endorse a Palestinian state. Peace with the Palestinians remains a distant dream and militant attacks in recent months in Jerusalem and elsewhere have ended years of relative calm.

Will the Israeli public elect the man who has dominated the political scene for the last two decades for a fourth term?

Despite his lead in the polls there are clear signs of fatigue and he is likely to draw fire from the right and centre, as well as the left, during the 100-day election campaign.

There is talk of left and centre parties uniting to form an anti-Netanyahu alliance, although it is not clear that such a move would increase their overall number of seats.

One thing is certain – 100 days is a long time in Israeli politics and, despite the polls, another victory for Netanyahu is not a foregone conclusion.