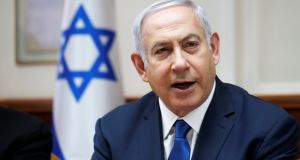 Israeli prime minister Binyamin Netanyahu: addressed the Knesset from the podium after the Bill was passed. “This is our country. The state of the Jews,” he said. Photograph: Reuters

Opposition lawmakers, human rights groups and diaspora Jewish organisations have criticised the Israeli government for passing a controversial Nationality Bill, which critics say discriminates against Arabs and other minorities.

After years of delays and disputes, the Bill was finally passed early Thursday morning after a stormy eight-hour debate, just before the Knesset parliament went into summer recess. The vote was 62 to 55, with two abstentions in the 120-seat parliament.

The Bill, pushed through by the right-wing and religious coalition, defines Israel as the nation-state of the Jewish people. The measure sets “the development of Jewish settlements nationwide as a national priority” and downgrades the status of Arabic from an official language to one with “special status”.

In an unusual move prime minister Binyamin Netanyahu addressed the Knesset from the podium after the Bill was passed.

After the vote, Arab Knesset members tore up copies of the Bill while crying out, “Apartheid!” Ayman Odeh, the leader of the predominantly Arab Joint List, waved a black flag. Joint List Knesset member Yousef Jabareen said the Bill was not only discriminatory against Arabs, who make up 20 per cent of Israel’s 9 million population, but racist.

“The result of this legislation will be to perpetuate the inferior status of the Arabs in Israel.”

Coalition members praised the Bill as “historic” and a “watershed moment” but lamented the fact that a clause permitting exclusively Jewish communities had been removed at the last minute. Opposition leader Yitzhak Herzog said time will tell if the Bill will harm Israel.

“We are truly saddened that the principle of equality, which is an inalienable asset in the defence of Israel’s good name, has vanished from this law.”

“This law was designed to sterilise the term democratic from the definition of the state of Israel as a Jewish and democratic state. We’re going to be a Jewish state, but we won’t be a democratic state if this law is implemented.”

The Nationality Bill is only the latest in a series of contentious measures enacted by the Netanyahu government. Previous legislation curbed the influence of the judiciary, the media and left-wing NGOs.