Skilled in taking over cities, IS mixes terror with courting of residents 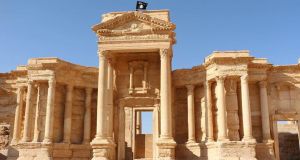 Islamic State appears to be using Palmyra as the latest outpost of its self-declared caliphate rather than immediately harming or looting the city’s magnificent Greco-Roman ruins. Photograph: AFP/HO/Welayat Homs

Hours after they swept into the Syrian city of Palmyra last week, Islamic State militants carried out scores of summary executions, leaving the bodies of victims – including d ozens of government soldiers – in the streets.

Then, residents say, they set about acting like municipal functionaries. They fixed the power plant, turned on the water pumps, held meetings with local leaders, opened the city’s lone bakery and started distributing free bread. They planted their flag atop Palmyra’s storied ancient ruins and did not immediately loot and destroy them, as they have done at other archaeological sites.

Next came dozens of Syrian government air strikes, some killing civilians. That gave IS a political assist: within days, some residents had redirected the immediate focus of their anger and fear from the militants on the ground to the war planes overhead.

In Palmyra, IS appears to be digging into power in a series of steps honed over two years of accumulating territory in Iraq and Syria. It alternates between terrorising residents and courting them. It takes over institutions. And it seeks to co-opt opposition to the government, painting itself as the champion of the people – or at least, the Sunnis – against oppressive central authorities.

That method has helped the group entrench itself in the cities of Raqqa, Syria, and Mosul, Iraq, and is now unfolding in Palmyra. But for IS, Palmyra also presents a new twist: it is the first Syrian city the group has taken from the government, not from insurgents. In Raqqa, farther north, and in Iraq, the group has moved quickly and harshly against anyone perceived as a rival.

The Palmyra takeover was detailed by half a dozen residents of the city, including supporters and opponents of the government, via phone or electronic messaging. All asked not to be fully identified, to avoid reprisals from the government or from IS , also known as Isis, Isil or Daesh. Most cast themselves as caught between threats of government air strikes and IS beheadings or other killings.

On Wednesday, for example, several residents reported IS had executed 20 army soldiers in an ancient amphitheatre. Others recalled seeing the bodies of soldiers burned alive or beheaded by militants. “They slaughtered many,” a cafe owner exclaimed about IS, then switched to the subject of air raids that he would later blame for the deaths of friends.

Some expressed surprise that so far, IS abuses had not been even worse – while at the same time they worried the group might be refraining from wider brutality while it courts support. “They are treating Palmyra’s people as if they were captured as human shields by the regime,” said a Palmyra native outside Syria receiving daily updates from family there.

The resident, who asked to be identified by a nickname, Dahham, said the group’s message to everyone but pro-government fighters seemed to be: “We have nothing to do with you. We know that you were under this regime and nobody helped you.” That was unexpected, Dahham said; he had feared IS would punish Palmyra for the freewheeling approach of its heavily Bedouin population and its relationship with the West. Traditional and tribal but not always strictly religious, many mixed easily with the foreign tourists whose business long sustained them.

But in Palmyra, where a small local insurgency was crushed in 2012, there is no armed anti-government rival. Perhaps feeling less threatened, IS militants have not immediately attacked activists who oppose both them and the government. One such activist, Khaled al-Homsi, said he had relatives in IS and was able to sit and talk with fighters.

The largest number, he said, were foreigners, mixed with a few locals and many Syrians from all over the country. Their only demand, he said, was to discard his cigarette, saying he could smoke in his house, not in public. “Daesh are trying to show some leniency,” he said. “But I don’t know how long it will last.”

Asked how residents viewed the group, “al-Homsi”, who uses a nom de guerre for safety, said civilians had little choice but to submit. Residents described seeing 30-80 corpses, mostly soldiers and some civilians, including some known as recruiters for pro-government militias. Al-Homsi said he saw the bodies of a large group of soldiers burned in a truck, perhaps while preparing to flee, and another four who had refused to come out of a house and were burned inside. By contrast, residents in the security forces who had been avoiding the battlefield – by paying bribes to stay home – were offered a chance to “repent”, Dahham and others said.

Members of prominent families are calculating where to throw their support. The director of the Palmyra Museum, Khalil al-Hariri, a government supporter, fled. One of his relatives, said to be a pro-government militia recruiter, was killed. Another, residents said, pledged allegiance to IS.

In speeches broadcast from mosque minarets, residents say, IS has been laying out rules and intentions. It has ordered residents to surrender any soldiers hidden in their houses. It has distributed black, flowing chadors to stores, saying women should wear them. It has declared people can leave town for Raqqa but only with permission.

So far, IS appears to have placed a priority on establishing Palmyra as a new outpost of its self-declared caliphate rather than immediately harming or looting the city’s magnificent Greco-Roman ruins. Its record of destroying or smuggling artifacts in Syria and Iraq has raised worldwide alarms, particularly after it bragged of having bulldozed ancient sites near Mosul this year. On Wednesday, in a radio broadcast, a man identifying himself as Abu Layth al-Saudi, the leader of the group in Palmyra, offered a clue to its plans. The sprawling ruins “won’t be damaged, God willing,” he said. “We will not touch it with our bulldozers as some tend to believe.”

But he said the fighters would smash statues “worshipped by infidels in the past”. On Wednesday, though, according to Homsi and others, the militant group used the ruins to stage a macabre spectacle, shooting 20 government soldiers in an ancient amphitheatre better known in prewar days for a music festival. Residents focus on a survival strategy, cowering from air strikes and digging wells when the pumps fail. The cafe owner, now in another city, said he had lost several friends in bombardments; seven people from two families died, including a gym teacher and a general’s wife. Now, he said, was fretting over how to evacuate his parents.

“We will lose a lot of martyrs in the upcoming days,” he said. Ahmad, the owner of a souvenir shop, said he had driven to Raqqa to fill his car with canned food. Roads to government-held Homs were impassable, he said, with military forces stopping Palmyra residents, “calling them traitors because they didn’t fight with them”, and arresting some.

“I feel sorry for the civilians; they are being used as fuel,” he said. “Between us, I might become an infidel to all the world’s religions.”