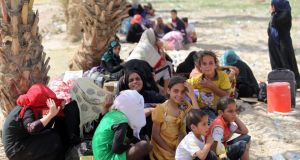 Iraqi families, who fled the city of Ramadi after it was seized by Islamic State, waiting to cross Bzeibez bridge on the southwestern frontier of Baghdad on Friday. Photograph: Ahmad al-rubaye/AFP/Getty Images

The Islamic State (IS) seized Syria’s last border crossing with Iraq yesterday, after big advances in both countries that have cast doubt on the effectiveness of the international coalition’s campaign against the jihadis.

The seizure caps a week of spectacular gains for IS, which saw it capture Syria’s ancient city of Palmyra days after it took the Iraqi provincial capital of Ramadi, an hour’s drive from Baghdad.

“Al-Tanf crossing is under the control of the caliphate, praise God,” said a Twitter post distributed by IS media outlets. Of Syria’s three crossings with Iraq, two are held by IS and one by Kurdish militias in northwestern Syria.

Palmyra, site of a Unesco World heritage site, gives the group access to nearby military bases and gas and oilfields as well as highways leading to Damascus, the capital, and the central city of Homs.

IS’s opponents fear that the group will target the countryside surrounding Damascus, Bashar al-Assad’s seat of power. Known as the “Ghouta”, the rebel-held area has been under a regime blockade for nearly two years. Activists in Damascus and its environs have long worried about IS sleeper cells within rebel ranks demoralised by the opposition’s inability to end the siege.

“It [IS]won’t head straight for the capital . . . it will go to the Ghouta and break the siege so it can gain the support of the people inside it,” said a Syrian opposition activist who lived under regime blockade and goes by the moniker Thaer al-Khalidiya. “Unfortunately, I think they will succeed. You can’t imagine how desperate people get when they are starving and under siege.”

Palmyra is home to one the country’s most despised state prisons. IS fighters stormed the facility on Thursday but found it empty, according to the group’s media sites, leaving the fate of its inmates unknown.

On Thursday IS captured part of the industrial city Sheikh Najjar in Syria’s northern Aleppo province, reviving fears the group may try to attack the city of Aleppo itself.

Many people living under IS rule in Syria and Iraq have come to despise IS, but many Palmyra residents welcomed the fighters and cheered the beheadings of police informants and hated government officials. One activist said: “People support the organisation [IS] because it is more merciful than the regime.” – Copyright The Financial Times Limited 2015