Islamic State’s evil genius and why it is thriving 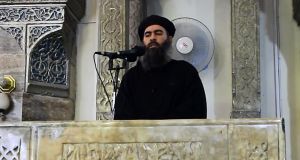 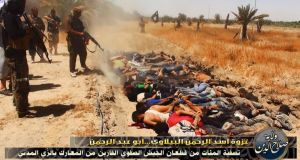 It seems a strange obsession for men so opposed to graven images that they smash ancient statues with sledge hammers.

The jihadists of Islamic State have turned videos of their executions into a trademark and propaganda weapon.

They have shown evil genius and a mastery of Hollywood techniques in devising ever more graphic means of slaughter, as if IS were engaged in a permanent competition to surpass itself in horror.

“Hostages must be liquidated in the cruellest manner to terrify our enemies and their allies,” one reads in The Management of Barbarity; What Islam Must Do to Restore the Caliphate.

The book, published in 2004 under the pseudonym Abu Bakr Naji, is considered the jihadist Mein Kampf.

A video posted by IS this summer shows executions in Iraq’s Ninevah province. In the first, prisoners are locked in a vehicle that is blown up with rocket launchers.

In the second, explosive collars are placed around the necks of kneeling men in orange jumpsuits - IS’s sempiternal allusion to Guantanamo. Then the collars are detonated.

In the final sequence, more than a dozen men described as spies for the US are locked in a cage that is lowered into a pool. An underwater camera films their agony as they drown.

The 21st century was not supposed to be like this. Back in 1989, the US historian Francis Fukuyama declared that with the end of the Cold War, “We may be witnessing . . . the end of history as such: that is, the end point of mankind’s ideological evolution and the universalisation of Western liberal democracy as the final form of human government.”

Fukuyama’s former professor, the political scientist Samuel Huntington, snapped back with a lecture and book titled The Clash of Civilisations.

Huntington predicted that cultural and religious identities would replace the contest between capitalism and communism as the world’s main source of conflict.

Strife would be “particularly prevalent between Muslims and non-Muslims,” especially the Christian-dominated West, he said.

Fukuyama eventually acknowledged radical Islam as “democracy’s only real competitor in the realm of ideas”.

But he discounted Islamism as a serious threat because Sunni Muslim radicals had never gained control of a state and because, he wrote, “the appeal of this kind of medieval Islamism is strictly limited”.

Islamic State appears to have proven that Fukuyama was wrong and Huntington was right.

Its brand of medieval Islam, characterised by round-the-clock executions, crucifixion, kidnapping, and slavery is the ideology on the rise in the Muslim world.

Some 22,000 foreign Muslims have flocked to northern Syria to fight in its ranks, 70 per cent in the past year alone.

The extremists of IS believe in purifying the world through takfir, or the excommunication of apostates.

All of the world’s 200 million Shia Muslims are thus marked for death. IS is both the main symptom and protagonist of the Sunni-Shia war that is tearing the region apart.

In instructions issued last November to Saudi followers, the “Caliph” Abu Bakr al-Baghdadi said to “deal with the Rafida (Shia) first . . . then the al-Sulul (supporters of the Saudi monarchy) . . . before the crusaders and their bases”.

With some 50,000 armed men, IS has seized half of Syria and a third of Iraq, an area the size of the UK.

It rules over six million people in a quadrangle skirted by the Iraqi cities of Mosul and Baghdad to the east, and the Syrian cities of Aleppo and Damascus to the west.

Terrorised by the jihadis’ reputation for genocidal fervour, the Iraqi army fled Mosul in June 2014, abandoning billions of dollars worth of US equipment, including more than 2,000 armoured Humvees.

The Syrian army behaved the same way when IS took the ancient city of Palmyra in May. Homs, Aleppo and even Damascus could follow.

In another victory in May, IS seized the Iraqi town of Ramadi, on the highway from Jordan to Baghdad.

It sells treasures from the 4,500 archaelogical sites it occupies, or uses them for propaganda, as when it filmed IS teenagers executing 25 Syrian army soldiers in the ancient Roman amphitheatre at Palmyra.

Unlike its precursor and rival al-Qaeda, which remained a nomadic, underground group, IS boasts the trappings of a state.

Its followers point an index finger heavenward and repeat the slogan “Baquiya”, signifying that the Islamic State will endure.

IS claimed responsibility for two attacks that killed 60 foreign tourists in Tunisia this year, and cheers “lone wolf” attacks such as the murders of 17 people in Paris last January and the beheading of a transport executive near Lyon at the end of June.

Western commentators tend to dismiss IS militants as psychopathic killers with little knowledge of Islam.

But as documented by the author and academic Graeme Wood in Atlantic magazine, the group’s supporters are determined to practice Islam and wage war as it was done in the seventh century.

“Slavery, crucifixion and beheadings are not something that freakish [jihadists] are cherry-picking from the medieval tradition,” Bernard Haykel of Princeton University, a leading expert on IS theology, told Wood.

On the contrary, they are “smack in the middle of the medieval tradition and are bringing it wholesale into the present day”.

An issue of the IS magazine Dabiq debated whether Yazidis, whose religion has elements of Islam, should be executed as lapsed Muslims or sold into slavery as kuffar (infidels).

When IS took Sinjar in northern Iraq a year ago, they turned thousands of Yezidis into slaves. Yezidi women were sold for up to $2,000 a piece.

Dabiq is the town in Syria where jihadis expect the “great battle” of “the end of days” where they will defeat what they call “the army of Rome”.

They share a belief in the imminent apocalypse with “Twelver” Shia and American Evangelicals.

Though the Ottoman caliphate officially ended in 1924, in the minds of jihadis, an authentic caliphate had not existed for 1,000 years.

They believe that every true Muslim must pledge allegiance (“baya’a”) to the caliph, and live in the lands ruled by him according to Shari’a.

It has long been known that the remnants of Saddam Hussein’s regime made common cause with the radical Islamists who began fighting the US occupation of Iraq in 2003.

The German magazine Spiegel obtained a 31-page blueprint for an “Islamic Intelligence State” drawn up by Muhammad al-Khlifawi, a former colonel in Ba’athist military intelligence.

Spiegel also obtained hundreds of documents abandoned by IS when it was forced out of its Aleppo office.

They show the extent to which IS is a hybrid of medieval Islam and 20th-century Ba’athism.

When the jihadists began staging commando raids, they always wore black masks, to make them more frightening and to prevent anyone from assessing their number.

It was Khlifawi and a small group of former intelligence officers who chose Abu Bakr al-Baghdadi to be the “emir” of what would become IS.

Barack Obama is the fourth consecutive US president to have bombed Iraq, but it was his predecessor George W Bush who created the IS monster by invading the Iraq.

In 2003, Paul Bremer, the head of the occupation authority, dissolved the Iraqi army and purged Ba’athists from the Iraqi administration, ensuring the long term enmity of the Sunni community.

The confessional system of government created by the US enabled the majority Shia to further marginalise and persecute the Sunni.

US policy towards Syria has been equally irrational. In 2012, president Barack Obama said he would intervene in the civil war if Bashar al-Assad crossed the “red line” of using chemical weapons against his own people.

Assad bombarded his population with impunity, and when he finally used chemical weapons in 2013, Obama did nothing. It was a field day for jihadist propaganda.

Washington refuses to engage in hostile action against Assad. The anti-IS coalition cannot agree on whether Assad’s regime should also be targeted in Syria, so most of the participants limit their actions to Iraq.

Washington clearly hopes to contain rather than eradicate IS. Airstrikes are limited to 15 per day, compared to 800 daily against Saddam Hussein’s regime in 2003. No one is ready to contemplate sending ground troops.

While the US and its allies thrash about in search of a strategy, IS thrives.

In Iraq, Obama continues to pit Kurds and Shia against Sunnis, the policy that proved so disastrous under George W Bush.

Lara Marlowe will deliver the Hubert Butler Annual Lecture on “The Age of Unreason; Nationalism and Jihad in the 21st Century” at 6 pm tonight at St Canice’s Cathedral in Kilkenny