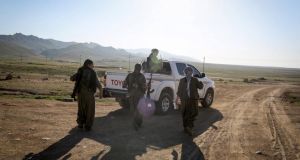 A file image showing Kurdistan Workers Party (PKK) fighters near their base in Sinjar. The PKK is fighting Islamic State in northwest Iraq. Photograph: Reuters

Islamic State militants are reported to have killed at least 300 captive Yazidis at a prison camp in northern Iraq, the latest mass killing carried out by the extremists targeting the sect.

Yazidi politician Mahma Khalil said 25 people had been shot dead. This toll was later updated to 300 deaths according to the Yazidi Progress Party.

Mr Khalil said those shot dead were killed at a prison camp near the town of Tal Afar, some 130kms east of the Syrian border. It is not clear if all the killings took place in the same camp.

Mr Khalil said he spoke to four different people with knowledge of what happened inside of the camp, though a reason for the 25 killings still was not immediately apparent.

“The militants want to spread horror among them to force them to convert to Islam or to do something else,” Mr Khalil said.

He added that those killed in the camp included men, women and the elderly. He said he believes some 1,400 other Yazidis are still held in the camp.

Tens of thousands of Yazidis fled in August when the Islamic State group captured the northern Iraqi town of Sinjar, near the Syrian border.

But hundreds were taken captive, with some Yazidi women forced into slavery, according to international rights groups and Iraqi officials.

About 50,000 Yazidis - half of them children, according to UN figures - fled to the mountains outside Sinjar during the onslaught. Some still remain there.

The US launched airstrikes and humanitarian aid drops in Iraq last August, partly in response to the crisis on Sinjar mountain.

Since then, a US-led coalition of countries have conducted airstrikes across Iraq in an effort to destroy IS, which now holds a third of both Iraq and Syria.

The Sunni militant group views Yazidis and Shiite Muslims as apostates deserving of death, and has demanded Christians either convert to Islam or pay a special tax.

Previously, the group has let go of hundreds of other Yazidis held in captivity.

Iraqi and Kurdish officials said they believe the militants could not afford to care for the prisoners, many of whom were elderly and sick.