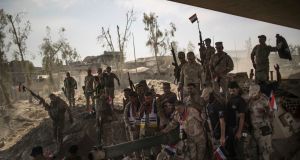 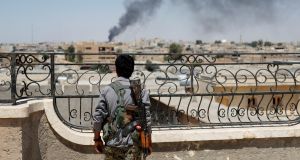 A Kurdish fighter from the People’s Protection Units (YPG) looks at the aftermath of a coalition air strike in Raqqa, Syria. File photograph: Goran Tomasevic/Reuters

Three years ago, a black-clad cleric named Abu Bakr al-Baghdadi ascended a mosque pulpit in the Iraqi city of Mosul and addressed the world as leader of a new terrorist state. The announcement of the caliphate was a high point for the extremist fighters of Islamic State. Their exhibitionist violence and apocalyptic ideology helped them seize vast stretches of territory in Syria and Iraq, attract legions of foreign fighters and create an administration with bureaucrats, courts and oil wells.

Today, their “state” is crumbling. In Syria, US-backed militias have surrounded Raqqa, the group’s capital, and breached its historic walls. Across the border, Iraqi forces have seized the remains of the Mosul mosque where al-Baghdadi appeared and besieged the remaining jihadis in a shrinking number of city blocks.

But the loss of its two largest cities will not spell a final defeat for Islamic State – also known as Isis and Daesh – according to analysts and US and Middle Eastern officials. The group has already shifted back to its roots as an insurgent force, but one that now has an international reach and an ideology that continues to motivate attackers around the world.

“These are obviously major blows to Isis because its state-building project is over, there is no more caliphate, and that will diminish support and recruits,” says Hassan Hassan, a senior fellow at the Tahrir Institute for Middle East Policy in Washington and a co-author of a book on the group. “But Isis today is an international organisation. Its leadership and its ability to grow back are still there.”

Islamic State has overshadowed its jihadi precursors like al-Qaeda by not just holding territory, but by running cities and their hinterlands for an extended period, winning the group credibility in the militant world and allowing it to build a complex organisation.

So even while its physical hold slips, its surviving cadres – middle managers, weapons technicians, propagandists and other operatives – will invest that experience in the group’s future operations. And even though its hold on crucial urban centres is being shaken, Islamic State is in no way homeless yet. In Iraq, the group still controls Tal Afar, Hawija, other towns and much of Anbar province. In Syria, most of its top operatives have fled Raqqa in the past six months for other towns still under Isis control in the Euphrates River valley, according to US and western military and counterterrorism officials who have received intelligence briefings.

Many have relocated to Mayadeen, a town 175km (110 miles) southeast of Raqqa near oil facilities and supply lines through the surrounding desert. They have taken with them the group’s most important recruiting, financing, propaganda and external operations functions, US officials say. Other leaders have been spirited out of Raqqa by a trusted network of aides to a string of towns from Deir el-Zour to Abu Kamal.

US special operations forces have targeted this area heavily with armed drones and attack planes, disrupting and damaging Islamic State’s leadership and ability to carry out operations. But the battle for Raqqa could still last many months.

It is all a new chapter in the history of a group whose roots go back to the United States’ invasion of Iraq in 2003. Fighting under various names and leaders, the Sunni militants who would evolve into Islamic State killed many Iraqis and US troops before Sunni tribal fighters paid by the US decimated them, driving the survivors underground by the time the United States withdrew from Iraq in 2011.

But fresh conflicts provided fresh opportunities. After the outbreak of the civil war in Syria in 2011, the group dispatched operatives there to build the force that later seized the country’s east, including Raqqa, which became its administrative capital.

Then it turned its sights back to Iraq, seizing Mosul in 2014, where al-Baghdadi made clear what distinguished his followers from al-Qaeda: They were not just insurgents, but also the founders of a state infused with extremist ideology. Now, senior US intelligence and counterterrorism officials say that more than 60,000 Islamic State fighters have been killed since June 2014, including much of the group’s leadership, and that the group has lost about two-thirds of its peak territory.

Islamic State has carried out nearly 1,500 attacks in 16 cities across Iraq and Syria after they were freed from the militants’ control, showing that the group has reverted to its insurgent roots and foreshadowing long-term security threats, according to a study also published by the Combating Terrorism Center at West Point.

Internationally, Islamic State has partly compensated for its losses at home by encouraging affiliates abroad – in Libya, Egypt, Yemen, Afghanistan, Nigeria and the Philippines – and by activating operatives elsewhere. Between 100 and 250 ideologically driven foreigners are thought to have been smuggled into Europe between late 2014 and mid-2016, nearly all through Turkey after crossing a now rigidly enforced border, European intelligence officials say. But they may not be the most dangerous threat facing European authorities as long as Islamic State ideology continues to motivate attackers. A recent study by the Program on Extremism at George Washington University and the International Centre for Counter-Terrorism examined 51 successful attacks in Europe and North America from June 2014, after the declaration of the caliphate, until June 2017, revealing that only 18 per cent of the 65 attackers were known to have fought in Iraq or Syria.

Most were citizens of the countries they chose to strike. Since Islamic State’s rise, the US and its allies have focused on breaking the group’s control of territory, but much less planning has gone into how communities damaged by jihadi rule will be rebuilt and governed afterward. Indeed, the jihadis’ departure could accelerate other conflicts.

In Syria, the US has armed and supported a militia called the Syrian Democratic Forces, or SDF, to fight the jihadis. Most of its leaders are Kurds, many with roots in the Kurdistan Workers’ Party, or PKK, which the United States and Turkey consider a terrorist organisation.

The group’s ascendance has angered Turkey, which considers it a threat, as well as many Syrian Arabs, who see it as a front for Kurdish empowerment at their expense. It also remains unclear how the bodies set up to govern areas seized from the jihadis can be financed so they can rebuild, restore services and provide security.

The administration of US president Donald Trump has shown little interest in such measures, although experts consider them necessary to prevent the jihadis from returning. “There is a tension in the US approach, to avoid extended commitments and nation-building on one hand and the need to prevent the possibility of a jihadi resurgence in the future on the other,” says Noah Bonsey, an analyst with the International Crisis Group.

The caliphate also lives on in the virtual realm, as its operatives and supporters churn out propaganda, bomb manuals, encryption guides and suggestions for how to kill the largest number of people with trucks. Its members have played down their losses, portraying them as mere setbacks in the long-term, worldwide battle against those who reject their ideology. “O brothers, I call upon you to rise up wherever you are and to surround them and monitor them, then attack them and kill them,” a Chechen suicide bomber said in a video released posthumously last month. “The disbelievers have gathered today from every faith and attacked the caliphate, but this had only added to our faith and courage.”

US officials acknowledge the difficulty of fighting the group online. “We spend an inordinate amount of time and resources as the United States, but also as our partners, trying to not only defeat Isis and their control of the physical caliphate, but their virtual space that they own,” Thomas P Bossert, Trump’s Homeland Security and counterterrorism adviser, said on July 2nd on ABC’s This Week. “They’re proselytizing. It’s troubling.”

Still, many Syrians and Iraqis whose lives the jihadis have ravaged are glad to see them chased out, despite worries about the future. “I am happy that Daesh is dying, but the fear of what might come next is killing this happiness,” says Ahmed Abdul-Qadir, a Raqqa native who was running an anti-jihadi media group in Turkey when gunmen he believes belonged to Islamic State shot him in the jaw. He is now in France, and he communicated via Facebook chat because he is between surgeries that have made it hard to speak.

“It makes me wish that this whole organisation would vanish and that no one who believes in its doctrine would remain alive,” he says.

1 Bobby Storey: The IRA's planner and enforcer who stayed in the shadows
2 Q&A: How close are we to having a Covid-19 vaccine?
3 Unflappable ‘Dr Tony’ became public face of Covid-19 crisis response
4 Transgender Cork farmer (65) surprised at positive response to telling her story
5 Ireland’s official coronavirus death toll likely to have been overstated, report finds
Real news has value SUBSCRIBE