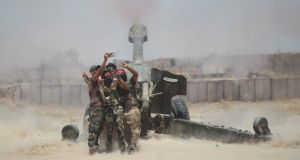 The Iraqi army stormed to the southern edge of Falluja under US air support on Monday and captured a police station inside the city limits, launching a direct assault to retake one of the main strongholds of Islamic State militants.

A Reuters TV crew about 1.5km from the city’s edge said explosions and gunfire were ripping through Naimiya, a district of Falluja on its southern outskirts.

The battle for Falluja is shaping up to be one of the biggest ever fought against Islamic State, in the city where US forces waged the heaviest battles of their 2003-2011 occupation against the Sunni Muslim militant group’s precursors.

Falluja is Islamic State’s closest bastion to Baghdad, and believed to be the base from which the group has plotted an escalating campaign of suicide bombings against Shia civilians and government targets inside the capital.

As government forces pressed their onslaught, suicide bombers driving a car and a motorcycle and another bomb planted in a car killed more than 20 people and injured more than 50 in three districts of Baghdad, police and medical sources said.

The Iraqi army launched its operation to recover Falluja a week ago, first by tightening a six-month-old siege around the city 50km west of Baghdad.

Falluja, in the heartland of Sunni Muslim tribes who resent the Shia-led government in Baghdad, was the first Iraqi city to fall to Islamic State in January 2014. Months later, the group overran wide areas of the north and west of Iraq, declaring a caliphate including parts of neighbouring Syria.

A Shia militia coalition known as Popular Mobilisation, or Hashid Shaabi, was seeking to consolidate the siege by dislodging militants from Saqlawiya, a village just to the north of Falluja.

The militias, who took the lead in assaults against Islamic State in other parts of Iraq last year, have pledged not to take part in the assault on the mainly Sunni Muslim city itself to avoid aggravating sectarian strife.

Falluja has been a bastion of the Sunni insurgency that fought both the US occupation of Iraq and the Shia-led Baghdad government that took over after the fall of dictator Saddam Hussein, a Sunni, in 2003.

The latest offensive is causing alarm among international aid organisations over the humanitarian situation in the city, where more than 50,000 civilians remain trapped with limited access to water, food and health care.

Falluja is the second-largest Iraqi city still under control of the militants, after Mosul, their de facto capital in the north that had a pre-war population of about two million.

It would be the third major city in Iraq recaptured by the government after Saddam’s home town Tikrit and Ramadi, the capital of Iraq’s vast western Anbar province.

Falluja is also in Anbar, located between Ramadi and Baghdad, and capturing it would give the government control of the major population centres of the Euphrates River valley west of the capital for the first time in more than two years.

The Kurdish forces, or peshmerga, have retaken six villages in total since attacking Islamic State positions on Sunday with the support of the US-led coalition, the Kurdistan Region Security Council said on Monday. That represents most of the targets of their latest advance.

Mr Abadi announced the onslaught on Falluja on May 22nd after a spate of bombings that killed more than 150 people in one week in Baghdad, the worst death toll so far this year. The worsening security in the capital has added to political pressure on Mr Abadi, who is struggling to maintain the support of a Shia coalition amid popular protests against an entrenched political class.