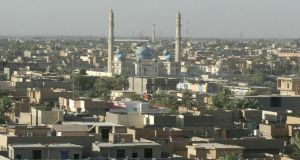 The city of Falluja, 50 km west of Baghdad, has been a longtime bastion of Sunni Muslim jihadists and was the first city to fall to the jihadists in January 2014. File photograph: Mohanned Faisal/Reuters

Iraqi Prime Minister Haider al-Abadi announced the launching of an offensive to retake the Islamic State stronghold of Falluja after the military told residents on Sunday to get ready to leave before fighting started.

“Zero hour for the liberation of Falluja has arrived. The moment of great victory has drawn near and Daesh has no choice but to flee,” Mr Abadi said on his official Twitter feed, using an Arabic acronym for the jihadist group.

He said the offensive would be conducted by the army, police, counterterrorism forces, local tribal fighters and a coalition of mostly Shia Muslim militias.

A US-led coalition that has bombed Islamic State in Iraq and neighbouring Syria for nearly two years was expected to provide air support.

Falluja, a longtime bastion of Sunni Muslim jihadists, 50 km west of Baghdad, was the first city to fall to the jihadists, in January 2014, six months before the group declared a caliphate spanning large parts of Iraq and Syria.

Iraqi officials said Shia militias, including ones backed by neighbouring Iran, may be restricted to operating outside the city proper, as they were largely in the battle for Ramadi, to avoid aggravating sectarian tensions with Sunni residents.

The Iraqi army, police and the militias, backed by coalition air strikes, have surrounded Falluja since late last year, while the jihadists have been preventing residents from leaving for months.

Families who cannot flee should raise white flags to mark their location in the city, the military’s media unit said in a statement on state television, a tactic employed with some success in other recent offensives.

Deputy District Council Chairman Falih al-Essawi said three corridors would be opened for civilians to camps west, southwest and southeast of the city, and a subsequent military statement said some residents had begun to flee.

“Our goal is to liberate civilians from Daesh’s repression and terrorism,” Abadi said in a televised speech.

Residents told Reuters about 20 families set out from a southern front-line neighbourhood late on Saturday but that only half of them made it out.

Some were intercepted by Islamic State, while others were killed by explosives planted along the road by the jihadists, the residents said.

The United Nations and Human Rights Watch said last month that residents were facing acute shortages of food and medicine during a siege by government forces.

Aid has not reached the city since the Iraqi military recaptured nearby Ramadi, the Anbar provincial capital, in December.

Essawi told a local television channel on Sunday that more than 75,000 civilians remained in Falluja, in keeping with a recent US military estimate of 60,000 to 90,000.

About 300,000 people lived in the Euphrates River city before the war.

Known as the “City of Minarets and Mother of Mosques”, Falluja is a focus for Sunni Muslim faith and identity in Iraq.

It was badly damaged in two offensives by US forces against al Qaeda insurgents in 2004.

Following recent government offensives in Rutba and Hit, control of Falluja would secure the road more than 500 km from Baghdad to the Jordanian border and northwards to Haditha, 190 km northwest of the capital.

But Islamic State still controls vast swathes of territory and major cities such as Mosul in the north.

Iraqi authorities have pledged to retake Mosul this year, although some officials question in private whether the army will be ready in time.