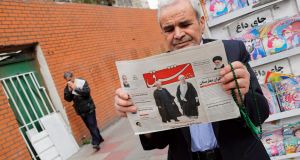 A man holds a copy of the daily ‘Shargh’ newspaper with pictures of Iran’s president Hassan Rouhani and former president Akbar Hashemi Rafsanjani under the headline ‘Decisive victory for the reformist, outside a kiosk in Tehran on Sunday. Photograph: Abedin Taherkenareh/EPA

Iran’s president Hassan Rouhani and his allies won big gains in elections that could deepen the country’s engagement with the world after his government ended years of sanctions by agreeing to curb its nuclear programme.

The outcome shown in the latest results on Monday was a blow to the conservative Islamic establishment, although it retains decisive power due to Iran’s unique dual system of clerical and republican rule.

Most of the lawmakers who did not make it to the new parliament strongly opposed the nuclear deal, including Mehdi Koochakzadeh, who called foreign minister Mohammad Javad Zarif “a traitor”, and Roohollah Hosseinian, who threatened to bury the negotiators under cement for agreeing to concessions to world powers.

“This election can be a turning point in the history of the Islamic Republic,” said an editorial in reformist newspaper Mardom-Salari, whose managing editor, Mostafa Kavakebian, won a parliamentary seat in Tehran according to the early results.

Mr Rouhani and allied centrists and reformers won 15 out of the 16 Tehran seats in the Assembly of Experts, final election results for Tehran showed, ousting two prominent conservatives including the speaker of the powerful clerical body.

“The biggest achievement of this election is the return of reformists to the ruling system ... so they won’t be called seditionists or infiltrators anymore,” he said, referring to hardliners who accused reformists of links to the West.

The results, carried on state news agency IRNA, suggest conservatives could lose their dominance of the 88-member body, which is tasked with choosing the next supreme leader, the country’s most powerful position.

The twin polls, for the assembly and parliament, were seen by analysts as a crucial moment for Iran after years of isolation, and a vote of confidence in Rouhani’s government and his detente policy with the West.

Mr Rouhani’s allies also won all 30 seats for the capital Tehran in Iran’s parliamentary elections, final results announced on Monday showed. “All 30 candidates who were on top of the list in the Tehran results yesterday made it to the new parliament,” interior minister Abdolreza Rahmani Fazli said on state television.

But their gains outside the capital were more limited, with conservatives keeping hold of many seats in both bodies.

The hardline chairman of the Assembly of Experts, Mohammad Yazdi, lost his seat. So did Mohammad-Taghi Mesbah-Yazdi, an arch-conservative who was widely seen as the spiritual mentor to former conservative president Mahmoud Ahmadinejad.

A prominent exception was Ahmad Jannati, who squeezed in at 16th place. Mr Jannati is also the chairman of the Guardian Council, a cleric vetting body that disqualified the majority of reformist candidates from running for the elections.

That opens the way for changes to economic policy that will boost foreign investment and trade with the West, businessmen and analysts said.

The outgoing parliament had acted as a brake on Mr Rouhani’s plans to strengthen the private sector, tackle corruption and welcome foreign investors.

“In economic affairs the next parliament will be much better than the current parliament,” said economist Saeed Leylaz, once an advisor to reformist former president Mohammad Khatami.

In his first comment since the polls, Iran’s deeply anti-Western supreme leader Ayatollah Ali Khamenei praised the high turnout. He made no direct comment on the results but suggested the newly elected bodies should not be influenced by the West.

Hossein Shariatmadari, editor-in-chief of Kayhan, a newspaper closely associated with the ayatollah, accused reformists of trying to create what he called an “illusion of a victory”.

“The structure of the Iran’s ruling system is such that no political faction can change the main policies rooted in its core principles. People’s vote is limited to the responsibility they have been given in the constitution,” Mr Shariatmadari wrote.

Iran’s political system places significant power in the hands of the conservative Islamic establishment including the Guardian Council, which vets all laws passed by parliament.

A Reuters tally of official results published so far suggested a strong showing by the pro-Rouhani camp and independents. Reformists had 58 seats, conservatives 105, and independents 46, results showed, excluding Tehran where results remain preliminary.

Analysts say the large number of independents may be significant as they could cooperate across ideological lines with Mr Rouhani’s government. There will have to be run-off contests for 34 seats in late April because no one won the required 25 percent of votes cast. More than a dozen of the initial winners in those contests were women.