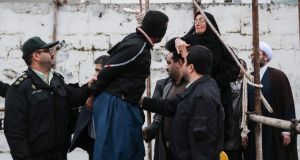 The mother (R) of murder victim Abdolah Hosseinzade slapping the face of Balal (C), who was convicted and sentenced to death for killing her son, before removing the rope from around his neck, during the execution in the northern city of Nowshahr, Iran on Tuesday. Photograph: Arash Kamooshi/EPA 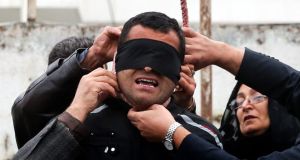 The mother (R) of murder victim Abdolah Hosseinzaderemoving the rope from Balal (C), who was convicted and sentenced to death for killing her son, during the execution in the northern city of Nowshahr, Iran on Tuesday. Photograph: Arash Kamooshi/EPA 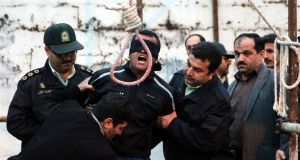 Convicted murderer Balal (C, with blindfold), who was sentenced to death for killing victim Abdolah Hosseinzadeh, shouting for mercy during his execution in the northern city of Nowshahr, Iran. Media reports state that the execution of 19-year old Iranian murderer Balal was halted in the last minute by the parents of his victim. Photograph: Arash Khamooshi /EPA

When he felt the noose around his neck, Balal must have thought he was about to take his last breath. Minutes earlier, crowds had watched as guards pushed him towards the gallows for what was meant to be yet another public execution in the Islamic Republic of Iran.

Seven years ago Balal, who is in his 20s, stabbed 18-year-old Abdollah Hosseinzadeh during a street brawl in the small town of Royan, in the northern province of Mazandaran. In a literal application of qisas, the sharia law of retribution, the victim’s family were to participate in Balal’s punishment by pushing away the chair on which he stood.

But what happened next marked a rarity in public executions in Iran, which puts more people to death than any other country apart from China. The victim’s mother approached, slapped the convict in the face and then decided to forgive her son’s killer. The victim’s father removed the noose and Balal’s life was spared.

Photographs taken by Arash Khamooshi, of the semi-official Isna news agency on Tuesday, show what followed. Balal’s mother hugged the grieving mother of the man her son had killed. The two women sobbed in each other’s arms - one because she had lost her son, the other because hers had been saved.

The action by Mr Hosseinzadeh’s mother was all the more extraordinary as it emerged that this was not the first son she had lost. Her younger child Amirhossein was killed in a motorbike accident at the age of 11.

“My 18-year-old son Abdollah was taking a stroll in the bazaar with his friends when Balal shoved him,” said the victim’s father, Abdolghani Hosseinzadeh, according to Isna. “Abdollah was offended and kicked him but at this time the murderer took a kitchen knife out of his socks.”

Mr Hosseinzadeh Sr has come to the conclusion that Balal did not kill his son deliberately. “Balal didn’t know how to handle a knife. He was naive.”

According to the father, Balal escaped the scene of the stabbing but was later arrested by the police. It took six years for a court to hand down a death sentence, and the victim’s family deferred the execution a number of times. A date for execution was set just before the Persian new year, Nowruz, but the victim’s family did not approve of the timing.

Mr Hosseinzadeh said a dream prompted the change of heart. “Three days ago my wife saw my elder son in a dream telling her that they are in a good place, and for her not to retaliate ... This calmed my wife and we decided to think more until the day of the execution.”

Many Iranian public figures had called on the couple, who have a daughter, to forgive the killer. Although they did so, Balal will not necessarily be freed. Under Iranian law the victim’s family have a say only in the act of execution, not any jail sentence.

In recent years Iran has faced criticism from human rights activists for its high rate of executions. The UN secretary general, Ban Ki-moon, accused president Hassan Rouhani of doing too little to improve Iran’s human rights, especially reining in its staggering use of capital punishment.

As of last week, 199 executions are believed to have been carried out in Iran this year, according to Amnesty, a rate of almost two a day. Last year Iran and Iraq were responsible for two-thirds of the world’s executions, excluding China.

At least 369 executions were officially acknowledged by the Iranian authorities in 2013, but Amnesty said hundreds more people were put to death in secret, taking the actual number close to 700.

Iran is particularly criticised for its public executions, which have attracted children among the crowds in the past. Iranian photographers are often allowed to document them.

Bahareh Davis, of Amnesty International, welcomed the unusual turn of events. “It is of course welcome news that the family of the victim have spared this young man’s life,” she said. “However, qisas regulations in Iran mean that people who are sentenced to death under this system of punishment are effectively prevented from seeking a pardon or commutation of their sentences from the authorities - contrary to Iran’s international obligations.”