Iran battles to bring economy back from brink

Sanctions not the only reason for Iran’s economic crisis, say experts 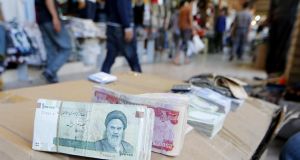 Iranian rial banknotes bearing a portrait of the late Ayatollah Khomeini sit on the stand of an Iraqi money dealer in Arbil. If the six great powers negotiating with Iran reach an agreement on the nuclear issue by the July 20th deadline, the rial is sure to appreciate. Photograph: Karim Sahib/AFP/Getty Images

The face of Ayatollah Ruhollah Khomeini, the father of Iran’s Islamic revolution, stares at you from one side of the 50,000 rial banknote. On the other side, the symbol for the atom is superimposed on a map of the country.

It’s fitting that the reference to Iran’s nuclear programme should be printed on the denomination most widely circulated, worth about €1.25. If the six great powers negotiating with Iran reach an agreement on the nuclear issue by the July 20th deadline, the rial is sure to appreciate.

Conversely, a Tehran taxi driver says, alluding to hardliners who oppose a nuclear deal: “Every time those crazy ayatollahs go on television, the rial goes down.”

In an attempt at simplification, authorities told people to drop the last zero, so 50,000 rials equals 5,000 tomans. Iranians mix rials and tomans in conversation, making their currency possibly the most confusing in the world. A simple meal costs hundreds of thousands of rials or thousands of tomans. Iranians don’t cart money around in wheelbarrows, but it’s not unusual to see plastic carrier bags full of banknotes.

When president Hassan Rouhani took office last year, inflation was running at 45 per cent, according to the IMF. His greatest achievement so far is to have brought it down to 16 per cent, according to official Iranian statistics, though some experts say it’s much higher. “Last year at this time, food prices were rising daily,” Mr Rouhani said on June 14th. “Now they are rising monthly. The horse was galloping very fast, and we have reigned it in.”

Joblessness is officially between 10 and 11 per cent. But that rate has been “fiddled” by redefining unemployment, for example counting anyone who works an hour a week as employed, and by not counting those who go back to university because they cannot find a job.

Imports sky-rocketed under the previous president, Mahmoud Ahmadinejad. “Iran now imports 95 per cent of its tea, 90 per cent of cooking oil, 55 per cent of wheat,” Mr Khoshchehreh said. “The textile industry was the second source of employment; now most of our cloth is imported from China . . . This is the main reason for joblessness among the unskilled.”

Iran’s energy reserves have prevented greater hardship. The country has the world’s second biggest gas reserves, and fourth largest oil reserves. Exports have decreased because of sanctions, but they’ve been sufficient to keep the balance of payments positive.

Iran awaits the lifting of sanctions like the return of the hidden imam. But Saeed Laylaz, an economist, informal adviser to the Rouhani administration and president of a company that manufactures city buses, disputes the widespread belief that Iran’s economic problems are caused by international sanctions.

“In my opinion, less than 10 per cent of our economic difficulties are due to sanctions,” Mr Laylaz says. “The first signs of economic crisis appeared in 2007, five years before the sanctions. The recession started in the summer of 2011, exactly one year before sanctions hit.”

Mismanagement and corruption under Mr Ahmadinejad, who ruled from 2005 until 2013, are the fundamental reason for Iran’s economic woes, says Mr Laylaz.

Under Mr Ahmadinejad, investment and productivity plummeted. The former president wanted to provoke economic sanctions, as shown by his repeated statements that the Holocaust was a lie, Mr Laylaz says.

Mr Khoshchehreh was briefly an adviser to Mr Ahmadinejad, but says he resigned when he realised the former president was irrational. “Ahmadinejad regarded sanctions as a scrap of paper,” the economist says. “I said at the time it was a stupid thing to say. Now [the authorities] understand, but it’s too late.”

In addition to his defiant, self-destructive bent, Mr Ahmadinejad was responsible for “the biggest wave of corruption in the history of the Middle East,” Mr Laylaz says. “They created a smokescreen and they looted hundreds of billions of dollars; between $300 and £400 billion in my estimation.”

Postponed loans were the most common form of corruption, Mr Laylaz says. During Mr Ahmadinejad’s first term, Iranian banks made between $100 billion and $150 billion in unsecured loans to the president’s cronies. “The government lowered interest rates and raised inflation by printing money . . . Some years, liquidity grew 40 per cent in this country. When inflation is 25 or 30 per cent, if you pay back your loan after 20 years, it costs you nothing.”

Mr Laylaz says Mr Rouhani’s administration is the best economic team in the history of Iran. But the economy shrank 6 per cent last year, and Mr Rouhani admits he cannot hope for a return to growth before next year. “The only way to achieve growth is new capital and technology,” he said. “I’m not saying that if sanctions stop we will not have unemployment. But ending the sanctions will help.”

“The purchasing power of the average Iranian worker is 40 per cent less than three years ago,” Mr Laylaz says. “For government employees, it’s 50 per cent less. Consumption of milk has dropped 25 to 30 per cent – it’s that bad.”