‘I would rather die at home’: residents in Gaza prepare for threatened onslaught 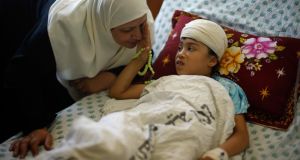 Nine-year-old Palestinian Maryam Al-Masri, whom hospital officials said was wounded in an Israeli air strike, listens to her grandmother as she lies on a bed while receiving treatment at a hospital in Gaza City yesterday. Photograph: Reuters/Mohammed Salem 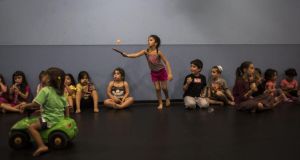 In a side street in Gaza’s Shati camp, an Israeli warning missile has just “knocked on the roof” of Alaa Hadeedi’s house, filling the road with a thin mist of smoke. A few ambulances have rushed to the scene and are waiting 100m or so from the house. Behind them, a crowd of wary neighbours gather to watch.

There is a sudden shout as someone hears the sound of the second missile – a live bomb this time – and the crowd surges backwards. Alaa Hadeedi’s house explodes in a billowing cloud of concrete and wood fragments.

A driver by trade, Alaa Hadeedi – who was not at home when the missile hit – stored gasoline inside his house. It ignites in an orange fireball.

This is the reality of Israel’s campaign of house destructions: a missile fired into a street in which perhaps 150 people are gathered barely 100m from the target; people anxious to help and equally anxious about their shops and houses.

According to al-Mezan, a Gaza-based Palestinian human rights group, in the past week 869 Palestinian homes have been destroyed or damaged in similar Israeli attacks that have also claimed the lives of 173 people, many of them civilians. Even as talk of a ceasefire is growing, the attacks by both sides continue.

The way the Israeli military tells it, “knocking on the roof” is a careful and humane practice, its drone operators and pilots holding back against the risk of collateral damage. But too often it is not careful, as the civilian death toll from the last week of attacks on Gaza attests.

A mile or so from Alaa Hadeedi’s house, in the same Shati neighbourhood, Dr Nasser Tatar, director general of Gaza’s largest medical facility, the Shifa hospital, is examining the ruins of his house and of his private clinic.

He says he had just returned to his family on Sunday night after working a week straight at an overwhelmed hospital short of resources. “We’ve had tens of deaths and hundreds of injured. I needed to be at the hospital,” he says. “It was just after the time for breaking the Ramadan fast at 7.50pm.

“The IDF called my nephew with a 10-minute warning saying that they planned to destroy my house. Because it took him several minutes to find me, it was less than 10 minutes. I got my family out quickly and warned my neighbours to take care. Then they hit my house with a rocket and then a second.”

He walks through the destruction, picking up a book left on his consulting desk now covered in dust, and examines the tangled crater at the centre of his gutted home.

“I’m at a loss to explain why they did this,” says 59-year-old Tatar. “I have been a doctor for 30 years. First I was a cardiologist, then head of cardiology, then director general. I have tried to reach out through channels to find out why this happened, but I’ve had no reply.”

It is not only individuals who are feeling the impact of Israel’s campaign but now whole communities, after Israel on Sunday advised the residents of large areas of the north of Gaza – which it says is the site of rocket launches – to leave before a threatened large-scale attack. In an area that is home to between 70,000 and 100,000 people, the warning has caused widespread fear and panic.

On the edge of Attatra, a mile or so from the Israeli border and one of the threatened areas, Hiba Abu Halima, 34, is walking with her sister. “We left yesterday before the 12 noon deadline,” she says. “We moved to a UN school in Gaza City. But we are farmers. I wanted to come back with our brother to water the crops. So we returned at nine this morning. We are afraid because no one is here. It was already too dangerous with the shelling and we were frightened by what the Israelis said they planned to do.”

There is a sharp detonation close by from a tank shell. Hiba’s sister presses herself to the wall bolt upright, her face crumpling as she bursts into tears. A lift is offered back to Gaza City but the sister refuses. “My brother is back there,” she says, sobbing. “I don’t know where he is. I have to wait to see that he is safe.”

Others from Gaza’s north who fled on Sunday are now living in crowded UN schools that have been opened as shelters. At the Alfakhoura school in Jabaliya yesterday families were still arriving, boys carrying in their bedding balanced on their heads.

Outside a classroom turned into a dormitory, 56-year-old Inshira Salman is sitting with her family of 15. “We slept on the ground outside last night,” she says. “All the rooms were full and we had no bedding. So we didn’t sleep last night.

“We came here in a panic. We live in a village only 700m or so from the border, which they have been shelling. Yesterday we heard on the television and on the radio that the Israelis had said they planned to attack and we should leave. We were so worried that we left. We’ll only go back when it is over.”

Not everyone, however, is prepared to stay the duration of the war in the UN refuges. Back in Attatra, 42-year-old Yasser Khdeir, an air conditioning engineer, is sitting outside his business with his son Faris (16) and other local boys.

He tells the story of Gaza’s recent wars, Israel’s Operation Cast Lead in 2008-2009 and Operation Pillar of Defence in 2012. “My nephew was killed just up the road in 2012. During Cast Lead I spent 20 days living in a UN school. I won’t do that again. It did not feel safe and I felt humiliated,” he says.

“My wife and other children are in Gaza City but I wanted to come home. I am staying in my house because it is the only option. If I am killed, I would rather die at home.” – (Guardian service)