Heavy fighting in Yemen’s Aden as ‘Houthis approach from east’ 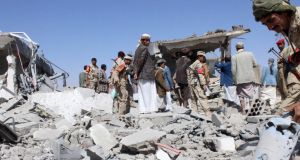 Soldiers and Houthi fighters inspect the damage caused by air strikes on the airport of Yemen’s northwestern city of Saada, a Houthi stronghold near the Saudi border, on Monday. Fighter jets attacked the Yemeni capital of Sanaa, residents said. Photograph: Reuters 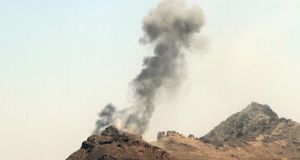 Smoke billows from military barracks in the Jabal al-Jumaima mountain following an air strike near Sanaa on Monday. Photograph: Reuters

Iran-allied Houthi militiamen pushed into the northeastern suburbs of the Yemeni port city of Aden on Monday amid heavy clashes with loyalists of president Abd-Rabbu Mansour Hadi, sources on both sides said.

Artillery and rocket fire struck the area around the Alam roundabout near the city’s airport, Hadi’s fighters said, after the Houthis advanced along an Arabian Sea coast road.

Aden is Hadi’s last bastion of control in Yemen and remains besieged despite a fifth day of Saudi-led air strikes aimed at checking the Houthi advance.

Earlier, Turkish president Tayyip Erdogan said on Monday he still plans to visit Iran next week, but is watching the crisis in Yemen, which has heightened diplomatic tensions between Ankara and Tehran.

Cancelling the trip would mark a further deterioration in relations between the two neighbours, who are at odds over the conflict in Syria and the crisis in Yemen, where Ankara supports a Saudi Arabian-led operation against Iran-backed Houthi forces.

“For the moment we are sticking to our Iranian programme unchanged, but we are monitoring Yemen,” Mr Erdogan told a news conference in Istanbul.

“Developments in Yemen are important. There could be steps that necessitate us making every kind of decision.”

Mr Erdogan accused Iran last week of trying to dominate the Middle East and said its efforts had begun to annoy Turkey.

He called on it to withdraw its forces from Yemen and stop supporting the Shia Houthi militia.

Iranian officials and lawmakers have since called on the government to cancel his visit planned for April 7th.

However, Iran’s deputy foreign minister Hassan Qashqavi was reported as saying on Sunday that there had been no change to Mr Erdogan’s visit.

Warplanes struck the Yemeni capital of Sanaa overnight, residents said, the fifth day of a campaign by Saudi-led forces against the Houthi fighters who are battling to oust Yemen’s Sunni Muslim president.