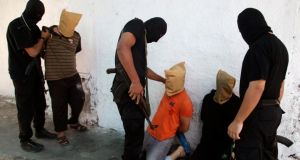 Hamas militants grab Palestinians suspected of collaborating with Israel, before executing them in Gaza City on August 22nd, 2014. Amnesty International condemned the extra-judicial killings in a report issued on Wednesday,. Photograph: Reuters

The militant group Hamas used last summer’s war with Israel in the Gaza Strip to carry out extrajudicial killings of at least 23 Palestinians accused of collaborating with Israel and to torture dozens of others, including political rivals, Amnesty International said in a report issued early on Wednesday.

The report said that many of those killed in July and August were on trial at the time, having been charged with collaboration, or were awaiting the outcome of appeals against death sentences from a military court in Gaza on the same charges. Two had been convicted and were serving prison terms when they were killed.

Amnesty said that many had been sentenced by courts whose proceedings were “grossly unfair”.

“In the chaos of the conflict, the de facto Hamas administration granted its security forces free rein to carry out horrific abuses, including against people in its custody,” Philip Luther, the director of the Middle East and North Africa programme of Amnesty International said in a statement from London. “These spine-chilling actions, some of which amount to war crimes, were designed to exact revenge and spread fear across the Gaza Strip. ”

Hamas, which has not accepted responsibility for the killings, responded to the report by blaming Israel for creating a “situation of chaos” during the war. Mushir al-Masri, a spokesman for Hamas, said Israel had attacked the Gaza security services, preventing them from managing Palestinian internal affairs properly.

“The Amnesty report about Hamas needs to be more precise,” Mr Masri said in a telephone interview. “Hamas did not claim responsibility for the killing of collaborators during the war. There was a press release issued by a group of Palestinian resistance factions. Hamas was not part of them.”

In reports published in recent months, Amnesty International accused Israel and the armed wing of Hamas of carrying out war crimes last summer. The human rights organisation said Israel had shown “callous indifference” by carrying out air strikes on homes that killed many civilians.

Palestinian armed groups, including Hamas’s military wing, fired thousands of rockets and mortars indiscriminately toward civilian areas in Israel, according to Amnesty, and also endangered Palestinian civilians by reportedly launching rockets from within civilian facilities, including schools and a hospital in Gaza.

Nearly 2,200 Palestinians, including more than 500 children, were killed during the conflict, according to the United Nations, and more than 70 Israelis died, most of them soldiers. On August 22nd, one day after Israel displayed its intelligence capabilities by killing three top Hamas commanders in Gaza, up to 18 Palestinians were summarily executed in public in what was seen as a warning to the people of the Gaza Strip.

Masked Palestinian gunmen in black T-shirts and pants paraded seven of the suspected collaborators, handcuffed and hooded, to their deaths outside a downtown mosque after Friday prayer. After weeks in which the militants had fought from the shadows, mostly keeping out of sight, the killings were meant to be photographed and publicised. Amnesty said the killings were part of an operation in Gaza called Strangling Necks, aimed at instilling fear and settling scores.

One of those killed was Atta Najjar, a former police officer under the Palestinian Authority, which was overthrown by Hamas in Gaza in 2007. Amnesty said Najjar, who had a mental disability, was arrested in 2009 and convicted of collaborating with Israel, and had been serving a 15-year prison term imposed by a military court when he was dragged out and killed.

A brother of Najjar, who was not identified, told Amnesty that Najjar’s body was riddled with about 30 bullets and showed signs of torture. “His arms and legs were broken,” he said. “His body was as if you’d put it in a bag and smashed it.”

Hamas also abducted, interrogated and tortured dozens of other Palestinians, including members and supporters of Fatah, the party that dominates the Palestinian Authority and is the main rival of Hamas, according to Amnesty. The group said that some of these Palestinians were held and abused in a disused outpatient clinic within the grounds of Gaza City’s main hospital, Shifa.

On Tuesday night, in a reminder of the region’s churning tensions, militants launched a rocket from Gaza that struck Israeli territory, according to the Israeli military. The rocket landed near Gan Yavne, a town outside the port city of Ashdod, causing no injuries but puncturing the fragile calm that has mostly prevailed since the 50-day war ended.

It was not immediately clear what group fired the rocket. Israel has attributed similar attacks in recent months to smaller groups in Gaza acting against a background of internal disputes and in defiance of Hamas, the Islamic organisation that controls the crowded coastal territory and has generally tried to enforce an informal ceasefire with Israel.

1 Shops, hairdressers and hotels expected to reopen next week
2 UCC academics concerned at deepening links with Minzu University
3 Stir-crazy Dutch holidaymakers set to descend on Caribbean island
4 Joe Biden does not want to see guarded Border in Ireland after Brexit
5 Bloomberg ranks New Zealand top in fight against Covid-19 - but how did Ireland fare?
Real news has value SUBSCRIBE