Opinion: The second phase of the night-time air attacks has seen the combat debut of the US Airforce’s new ‘stealth’ aircraft – the F-22 Raptor 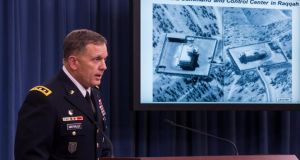 Lt Gen William C Mayville Jr, briefing the media on airstrikes on Islamic State (IS) positions in eastern Syria in the Pentagon Briefing Room in Arlington, Virginia, on September 23rd. He said that missiles took out IS command and control facilities, training camps, and explosive facilities. Photograph: EPA/JIM LO SCALZO 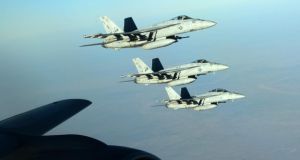 This week’s air strikes by the United States and its Gulf allies are novel in a number of respects. It is the first time the US has become directly militarily involved in Syria’s civil war. It is also the first time since Operation Desert Storm that such a broad US-Arab military coalition has formed to target Islamist fighters in the Middle East. US president Barack Obama and his exclusively Sunni Arab coalition – consisting of Saudi Arabia, United Arab Emirates, Jordan, Bahrain and Qatar – present a united front in a growing ethnosectarian conflict within Syria and Iraq.

Many in the international defence and intelligence community have come to the conclusion that the bitter interethnic conflict within Iraq and Syria is in fact a proxy war for wider Sunni and Shia tensions throughout the Middle East. Shia ambitions for regional dominance are reflected in a de facto and emergent axis of influence and military power that now stretches from Teheran, through the Shia-led government in Baghdad, to Damascus and Hizbullah’s stronghold in Beirut in Lebanon.

Saudi Arabia’s head of intelligence, Prince Bandar bin Sultan, recently advised US secretary of state John Kerry that Islamic State (IS) and its al-Qaeda affiliates were effectively bankrolled by wealthy Saudis, Qataris and other ‘Gulfis’ as a reaction to and disenchantment with growing Shia influence in the region. However, since IS now appears to threaten directly the royal families of the US’s traditional Gulf State allies in the region they have decided to act militarily to neutralise these newly emerging pretenders to Sunni hegemony.

From a military perspective the air and missile strikes are nothing new. Over the last decade, throughout the global war on terror, the world has become used to the concept of air, missile and drone strikes to “neutralise” terror threats. This week’s attacks follow that conventional pattern.

The second phase of the attacks has seen the combat debut of the US air force’s new stealth aircraft, the Lockheed Martin F-22 Raptor. This is being deployed as it is designed to evade any IS or Syrian Arab army air defence systems. Interestingly, the US joint staff’s director of operations, Lt Gen William Mayville, stated that Syria’s air defence systems had switched to “passive mode” during US air operations this week – suggesting some level of co-operation from the Assad regime in the prosecution of air strikes against IS. The Raptors are aircraft of the USAF 525th fighter squadron and are capable of attacking Syria on an ongoing basis from US air force bases at Al Udeid in Qatar, Ali Al Salem air base in Kuwait and Isa air base in Bahrain.

Once Iraqi and Syrian airspace has been declared open after each initial and successive attack wave, a final set of sorties by more conventional F-18 aircraft – operating from the US aircraft carrier George H Bush – complete attacks on IS personnel and assets.

In other words, the use of air power alone by the US and its allies will be insufficient to – as President Obama put it – “degrade and destroy” IS. It will be necessary to persuade other regional stakeholders, whether they be Kurdish peshmerga, Shia Iraqi army troops or Sunni tribal groups, to press home the assault in a boots-on-ground operation.

While the US and the international community await developments in this regard, a large number of US and allied special forces will remain on the ground in Iraq and Syria in order to identify and “paint” or highlight targets for laser guided munitions from the ongoing air campaign. Special forces will also be on standby and on site to rescue and extract any downed US or coalition air crew in the coming weeks.

In a letter to the UN Security Council the US has invoked Article 51 of the UN charter – about individual and collective defence against attack – as a flimsy legal defence for its operations in Syria. It has also cited Security Council resolution 2170 – passed in August – which demands the disarming of IS as a rationale for its entry into the Syrian civil war.

In the short term, air strikes will inhibit IS activity and possibly contain its local territorial expansion. However, such attacks will not alter the yawning ethnosectarian divide between Sunni and Shia in the Middle East. Indeed, an exclusively US-Sunni coalition may further polarise relations between Iran, Iraq, Syria, Lebanon and the Gulf states. Russia is unambiguous in its support for Teheran and Shia interests in the region. The implications of a rival US-Sunni military and political coalition may yet have wider regional or even global consequences.

Tom Clonan is a security analyst

1 Murder in a crowded house: The full story of the Patricia O’Connor trial
2 Shane Ross: ‘I lost a friendship with Mattie McGrath completely. He got totally personal’
3 Areas advised to ‘stop everything’ as Storm Jorge hits Ireland
4 ‘Nobody cares’: Children freeze to death as Syrians flee onslaught in Idlib
5 Coronavirus: Aer Lingus cabin crew in self-isolation after passenger’s positive test
Real news has value SUBSCRIBE