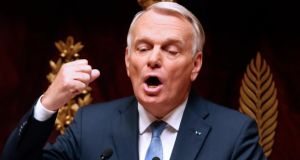 French prime minister Jean-Marc Ayrault makes the case for intervention in Syria on moral grounds during a parliamentary debate at the national assembly in Paris yesterday. Photograph: Reuters/Charles Platiau

The French national assembly debate over military intervention in Syria turned preconceptions of a pacifist left and hawkish right upside down.

The socialist prime minister Jean-Marc Ayrault made the case for intervention on moral grounds, saying “passiveness is not an option against barbarity; not for France”. Conservatives clung to international legitimacy and the supremacy of the United Nations. “The days of punitive expeditions are over,” said centre-right deputy Jean-Louis Borloo. “You are asking us to renounce our signature of the UN charter.”

Opinion polls last week showed that 64 per cent of French people do not want France to participate in military strikes against Syria. President François Hollande first said he would intervene on August 27th. He reiterated his determination to do so, as part of a “broad coalition”, on September 3rd.

Left-wing certainty
Mr Ayrault tried to ease French doubts about attacking Syria. “We are certain . . .” he repeated seven times, listing the conclusions of French intelligence reports which said some 1,500 people died in a chemical attack on August 21st, and that the Syrian opposition could not have done it.

The socialist deputy Bruno Le Roux boasted “our own intelligence services, the same ones that gave [conservative president] Jacques Chirac information justifying the French [anti-war] position in 2003” had provided “irrefutable proof” that the regime used chemical weapons against its own people.

Christian Jacob, the group leader for the conservative UMP, said his party has two conditions for French action: publication of the UN report on the chemical attack, and a UN mandate.

Mr Ayrault pointed out that UN inspectors are not meant to ascribe responsibility for the attack, merely confirm the use of chemical weapons.

“Of course, explicit authorisation by the UN Security Council would be desirable,” the prime minister continued through shouts from opposition benches . “But let us be realistic. For 2½ years, Russia and China have blocked all response to the Syrian tragedy, including by imposing their veto three times.”

Hundreds of miles away, in Oradour-sur-Glane, Mr Hollande was commemorating the massacre of 642 French men, women and children by Nazi troops in 1944, in the company of German president Joachim Gauck. In an allusion to Syria, Mr Hollande spoke of “the torturers of the past, but also of the present”. Human rights must be defended, he said, because of the atrocities that happened in Europe.

Back in Paris, Mr Jacob ridiculed Mr Hollande, saying the president had got himself into “a total impasse” by promising intervention. “France is isolated as never before,” he asserted. When France took the side of rebels against Muammar Gadafy, he reminded the assembly, Mr Hollande demanded the UN’s blessing.

“France must be the ally of the US, never aligned,” Mr Jacob said. “Your eagerness to support Washington is surprising.”

Grappling with irrelevance
The right seemed to oppose Mr Hollande mainly for domestic political advantage. But the prevailing impression at the conclusion of the two-hour debate was of a once great power grappling with its own irrelevance. “The decision to engage our forces no longer depends on this assembly, nor on our president, but on the meeting between Obama and Putin and the US Congress,” observed centre-left deputy Paul Giacobbi.