Explainer: How do Sunni and Shia Islam differ?

Saudi Arabia-Iran crisis: split has roots in schism after death of Prophet Muhammad 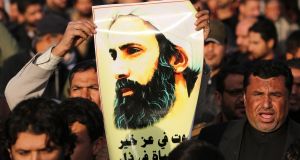 An Iraqi man holds a portrait of Shia Muslim cleric Nimr al-Nimr during a demonstration against his execution by Saudi authorities in Baghdad on Sunday. Photograph: Ahmad Al-Rubaye/AFP/Getty Images

Saudi Arabia’s execution of Shia cleric Sheikh Nimr al-Nimr could escalate tensions in the Muslim world even further. In the Shia theocracy Iran, the supreme leader, Ayatollah Ali Khamenei, said on Sunday that Saudi Arabia, which is ruled by a Sunni monarchy, would face “divine vengeance” for the killing of the outspoken cleric, which was part of a mass execution of 47 men.

Al-Nimr had advocated for greater political rights for Shias in Saudi Arabia and surrounding countries. Saudi Arabia had accused him of inciting violence against the state. Here is a primer on the basic differences between Sunni and Shia Islam.

What caused the split?

A schism emerged after the death of the Prophet Muhammad in 632. He died without appointing a successor to lead the Muslim community, and disputes arose over who should shepherd the new and rapidly growing faith. Some believed that a new leader should be chosen by consensus; others thought that only the prophet’s descendants should become caliph. The title passed to a trusted aide, Abu Bakr, though some thought it should have gone to Ali, the prophet’s cousin and son-in-law. Ali eventually did become caliph after Abu Bakr’s two successors were assassinated.

After Ali also was assassinated, with a poison-laced sword at the mosque in Kufa, in what is now Iraq, his sons Hasan and then Hussein claimed the title. But Hussein and many of his relatives were massacred in Karbala, Iraq, in 680. His martyrdom became a central tenet to those who believed that Ali should have succeeded the prophet. (It is mourned every year during the month of Muharram). The followers became known as Shias (or Shi’ites), a contraction of the phrase Shiat Ali, or followers of Ali.

The Sunnis, however, regard the first three caliphs before Ali as rightly guided and themselves as the true adherents to the Sunnah, or the prophet’s tradition. Sunni rulers embarked on sweeping conquests that extended the caliphate into North Africa and Europe. The last caliphate ended with the fall of the Ottoman Empire after the first World War.

How do their beliefs differ?

The Sunni and Shia sects of Islam encompass a wide spectrum of doctrine, opinion and schools of thought. The branches are in agreement on many aspects of Islam, but there are considerable disagreements within each. Both branches include worshippers who run the gamut from secular to fundamentalist. Shias consider Ali and the leaders who came after him as imams. Most believe in a line of 12 imams, the last of whom, a boy, is believed to have vanished in the ninth century in Iraq after his father was murdered. Shias known as Twelvers anticipate his return as the Mahdi, or Messiah. Because of the different paths the two sects took, Sunnis emphasise God’s power in the material world, sometimes including the public and political realm, while Shias value martyrdom and sacrifice.

Which sect is larger, and where is each concentrated?

More than 85 per cent of the world’s 1.5 billion Muslims are Sunni. They live across the Arab world, as well as in countries like Turkey, Pakistan, India, Bangladesh, Malaysia and Indonesia. Iran, Iraq and Bahrain are largely Shia. The Saudi royal family, which practices an austere and conservative strand of Sunni Islam known as Wahhabism, controls Islam’s holiest shrines, Mecca and Medina. Karbala, Kufa and Najaf in Iraq are revered shrines for the Shias.

Saudi Arabia and Iran, the dominant Sunni and Shia powers in the Middle East, often take opposing sides in regional conflicts. In Yemen, Shia rebels from the north, the Houthis, overthrew a Sunni-dominated government, leading to an invasion by a Saudi-led coalition.

In Syria, which has a Sunni majority, the Alawite Shia sect of President Bashar Assad, which has long dominated the government, clings to power amid a bloody civil war. And in Iraq, bitter resentments between the Shia-led government and Sunni communities have contributed to victories by the Islamic State.