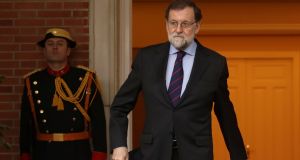 A series of revelations linking Spain’s governing Popular Party (PP) to alleged bribes and under-the-counter payments are putting prime minister Mariano Rajoy under pressure and threatening to destabilise his administration.

In recent days the high court has been trying suspects in an allegedly widespread system of kickbacks involving PP members and businesses in the Valencia region. On Wednesday, Ricardo Costa, the party’s former regional deputy leader, told the court that the PP financed its successful 2007 election campaign there with bribes.

“I knew about it, I didn’t stop it, I didn’t carry out my duty to denounce it and so I’m willing to face the consequences,” said Mr Costa, who is the first serving senior member of the PP to confirm such practices. The prosecutor has requested that he be jailed for more than seven years.

Mr Costa gave names, dates and other details about the alleged scheme, admitting that on one occasion he collected €515,000 in cash from three businesses in order to pay off a party debt. He also said his former boss, Francisco Camps, had overseen the receipt of bribes in exchange for lucrative public contracts.

Mr Camps stepped down as president of Valencia in 2011 amid accusations he had received bribes in the form of bespoke suits. He was subsequently cleared of those charges and he denies any wrongdoing.

The PP itself has long sought to play down the veracity of such accusations, although this week it has been more contrite.

“For us this is shameful, a disgrace and I apologise to people of good faith who have voted for the PP, but I can guarantee that these were exceptional cases,” said the party’s parliamentary spokesman, Rafael Hernando.

These allegations are part of a barrage of corruption scandals that have plagued the PP in recent years.

In 2013, documents belonging to the PP’s former treasurer, Luis Bárcenas, appeared to show that he had supervised a long-standing cash fund at the party’s Madrid headquarters that was funded by corporate bribes. In July of last year, Mr Rajoy became the first serving prime minister to testify in court as he was questioned about his knowledge of the alleged scheme.

In December, a judge confirmed that the party will face trial for destroying computers belonging to Mr Bárcenas which were believed to contain compromising information.

Earlier this month, the Council of Europe issued a report in which it regretted than none of the 11 proposed measures it had previously suggested to counter corruption in Spain had been fully adopted.

Pablo Iglesias, leader of the leftist Podemos party, described the most recent revelations as “an international embarrassment” and he accused the government of using the Catalan political crisis to cover up its own scandals.

But while Mr Rajoy has survived corruption-related turmoil in the past, his current parliamentary fragility makes his government particularly vulnerable now.

Another cash-for-contracts investigation, focused on the Madrid region, has seen PP senator Pilar Barreiro named as a suspect. So far she has resisted opposition calls to resign. But the liberal Ciudadanos party has threatened to withdraw its support for the government’s 2018 national budget if she does not go, raising the possibility of a general election.

“If [Mr Rajoy] fulfils his promise, there’ll be a budget,” said Ciudadanos leader Albert Rivera on Wednesday, claiming the PP had pledged to withdraw any of its politicians who are named as suspects from front-line activity.

With the PP no longer holding the majority it had during its previous term in office, the support of Ciudadanos, with 32 seats in Congress, is crucial for it.

The tensions between the two parties come as Ciudadanos has soared in polls on the back of its uncompromising, unionist approach to the Catalan crisis. A poll by El País newspaper recently showed it was the leading party in terms of voter intention.