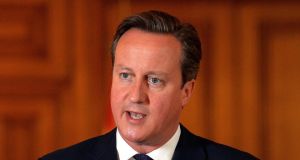 Here is the text of David Cameron’s speech, given in Downing Street this afternoon after chairing a meeting of the Government’s Cobra emergency committee to discuss the killing of British aid worker David Haines by Islamic State:

Today the whole country will want to express its deep sympathy for David Haines’ family.

They have endured the last 18 months of David’s captivity with extraordinary courage and now David has been murdered in the most callous and brutal way imaginable by an organisation which is the embodiment of evil.

We will hunt down those responsible and bring them to justice no matter how long it takes.

David Haines was an aid worker. He went into harm’s way, not to harm people but to help his fellow human beings in the hour of their direst need, from the Balkans to the Middle East.

His family spoke of the joy he felt when he learned he got his job in Syria. His selflessness, his decency, his burning desire to help others has today cost him his life. But the whole country, like his grieving family, can be incredibly proud of what he did and what he stood for in his humanitarian mission.

David Haines was a British hero. The fact that an aid worker was taken, held and brutally murdered at the hands of ISIL sums up what this organisation stands for.

They are killing and slaughtering thousands of people - Christians, Muslims, minorities across Iraq and Syria. They boast of their brutality. They claim to do this in the name of Islam. That is nonsense. Islam is a religion of peace. They are not Muslims, they are monsters.

They make no secret of their desire to do as much harm, not just in the Middle East but to any countries or peoples who seek to stand in their way, or dare to stand for values they disagree with.

It was an ISIL fanatic who gunned down four people in a museum in Brussels. So let me be clear, the British people need to know this is a fanatical organisation called ISIL that has not only murdered a British hostage, they have planned and continue to plan attacks across Europe and in our country.

We are a peaceful people, we do not seek out confrontation. But we need to understand - we cannot ignore this threat to our security and that of our allies. There is no option of keeping our heads down that would make us safe. The problem would merely get worse, as it has done over recent months. Not just for us, but for Europe and for the world.

We cannot just walk on by if we are to keep this country safe. We have to confront this menace. Step by step, we must drive back, dismantle and ultimately destroy ISIL and what it stands for.

We will do so in a calm, deliberate way, but with an iron determination. We will not do so on our own, but with working with our allies, not just in the United States and in Europe, but also in the region. Because this organisation poses a massive threat to the entire Middle East. So we will defeat ISIL through a comprehensive and sustained counter-terrorism strategy.

First, we will work with the Iraqi government to ensure it represents all of its people and is able to tackle this threat effectively.

We will support the Kurdish regional government who are holding the front line against ISIL. We will help them protect their own people and the minorities - including Christians that they have helped already - through our supplies of ammunition and of training.

Second, we will work at the United Nations to mobilise the broadest possible support to bear down on ISIL.

Third, the United States is taking direct military action. We support that. British Tornadoes and surveillance aircraft have been helping with intelligence gathering and logistics.

This is not about British combat troops on the ground. It is about working with others to extinguish this terrorist threat.

As this strategy intensifies, we are ready to take whatever steps are necessary to deal with this threat and keep our country safe.

Fourth, we will continue to support the enormous humanitarian efforts, including using the RAF to do so, to help the literally millions of people who have fled ISIL and are now living in appalling conditions.

Fifth, and perhaps most important, we will maintain and continue to reinforce our formidable counter-terrorist effort here at home, to prevent attacks and to hunt down those who are planning any.

It falls to the Government and to each and every one of us to drain this poison from our society and to take on this warped ideology that is radicalising some of our young people.

The murder of David Haines at the hands of Isil will not leave Britain to shirk our responsibility with our allies to deal with the threat that this organisation poses. It must strengthen our resolve.

We must recognise it will take time to eradicate a threat like this. It will require, as I have described, action at home and abroad. This is not something we can do on our own, we have to work with the rest of the world.

Ultimately our security as a nation, the way we go about everyday lives in this free and tolerant society that is Britain, has always depended on our readiness to act against those who stand for hatred and who stand for destruction. That is exactly what we will do.