Bombing of Syria is a trap by Islamic State, says ex-hostage

Nicolas Henin, a French journalist, was held captive by ISIS for 10 months, one of his jailers was Mohammed Emwazi, better known as 'Jihadi John'. Video: The Syria Campaign 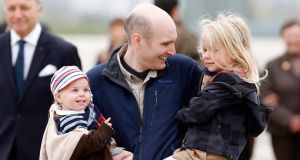 Nicolas Hénin being greeted by his children at Villacoublay military airport outside Paris after his release from captivity in April 2014. Photograph: Etienne Laurent/EPA

A French journalist held hostage by Islamic State for 10 months, has made an impassioned plea against bombing Syria, saying it was a trap that would only benefit Islamic State.

Nicolas Hénin, previously held hostage by Mohammed Emwazi, implored the international community to seek a political solution. Engaging with Syrians, not bombing them, was the surest way to bring about the collapse of Islamic State, also known as Isis, he said.

In a five-minute video said to have been recorded in the past few days in Paris and posted on YouTube by the Syria Campaign, Hénin said: “Strikes on Isis are a trap. The winner of this war will not be the parties that have the newest, most expensive, most sophisticated weaponry, but the party that manages to have the people on its side.”

In his message, apparently timed to coincide with Wednesday’s UK parliament debate on joining Syria air strikes, he said: “At the moment, with the bombings, we are more likely pushing the people into the hands of Isis. What we have to do, and this is really key, we have to engage the local people.

“As soon as the people have hope in the political solution, then Islamic State will just collapse. It will have no ground any more. It will collapse.”

Hénin was released along with other French hostages in April 2014. He had been held captive alongside James Foley, Steven Sotloff, David Haines and Alan Henning, who were all murdered by Emwazi.

“Mohammed Emwazi was one of my captors. He is the one who murdered my friends,” said Hénin. “I can’t prevent myself from thinking for the six murders that he committed, face to camera, murders of westerners, how many Syrians did he kill, and who cares for them?”

He said the jihadis lived in a parallel world and a “different matrix”. They believed in a “mad prophecy” that there would be a global confrontation between a coalition of “80 armies against an army of Muslims coming from all over the world” and were “a bit out of their mind”.

He said the radicalisation was the result of passivity by the international community, who failed to assist Syrian democrats “as they were yelling for their freedom, and the Syrians were living in total despair”.

He said: “For every single Syrian killed since the beginning of this conflict by Islamic State, between seven and 10 have been killed by the Syrian regime. We have to understand that these two parallel disasters for the Syrian people, they depend one on the other, and one cannot fight one without fighting the other.”

Hénin said the summer refugee crisis had been a propaganda blow to Isis. Images of refugees fleeing the Muslim “dreamland” and being welcomed in the lands of “unbelievers” had given a lie to their message of western hatred towards Muslims, he said. “And that is why they probably tried to manipulate the public during the Paris attack, to make us close our borders, and maybe, even more importantly, to close our minds.”

There was an easy way to make Islamic State “lose ground at high speed” he said. “It would be for the international community to take the decision that all the Syrian regions that are held by the opposition are no-fly zones; no-fly zones for everybody. Not the coalition, not the Russians, not the regime. Nobody. So, actually to provide security to the people would be devastating for Isis and this is what the international community should focus on,” he said.