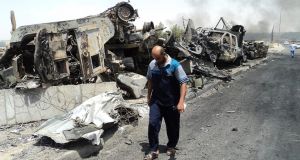 A man walks past near remains of burnt vehicles belonging to Iraqi security forces in the northern Iraq city of Mosul. Photograph: Reuters

Violent insurgency in Iraq is the “predictable” result of the West’s failure to intervene in Syria, not of the 2003 invasion to topple Saddam Hussein, Tony Blair declared in a renewed call for military action.

The former British prime minister rejected as “bizarre” arguments that Iraq would be more stable and peaceful today if the US-backed war, which claimed the lives of 179 UK personnel, had not happened.

And he said that unless the international community was prepared to overcome public reluctance and confront the extremists “hard, with force”, the consequences would be more serious still.

Mr Blair - now a Middle East peace envoy - said Iraq was “in mortal danger” but pinned the blame on the sectarianism of the Maliki government and the spread of Syria’s brutal three-year civil war.

Sweeping territorial gains for the radical Sunni fighters from the al-Qaeda offshoot Islamic State of Iraq and the Levant (Isis) have refocused attention on the hugely controversial 2003 Iraq war.

But Mr Blair hit back at critics in an eight-page essay on his website, saying al-Qaeda had been a “beaten force” in Iraq as recently as three years ago but the chance of peace was squandered by Baghdad.

“By all means argue about the wisdom of earlier decisions,” he wrote. “But it is the decisions now that will matter.

“The choices are all pretty ugly, it is true. But for three years we have watched Syria descend into the abyss and as it is going down, it is slowly but surely wrapping its cords around us pulling us down with it.

“We have to put aside the differences of the past and act now to save the future.

“Where the extremists are fighting, they have to be countered hard, with force.”

It did not mean another invasion, he said - as US president Barack Obama considers other military options such as air strikes.

“There are masses of responses we can make short of that. But they need to know that wherever they’re engaged in terror, we will be hitting them.”

Mr Blair said the Iraq assault had been planned and prepared in the Syria conflict zone and was the “predictable and malign effect” of allowing that situation to be exploited by extremists.

“There is...no doubt that a major proximate cause of the takeover of Mosul by Isis is the situation in Syria. To argue otherwise is wilful,” he said.

Air strikes against the regime of Bashar al-Assad had been on the table last summer over its use of chemical weapons but a Commons vote against the idea helped end the prospect of action.

“I understand all the reasons following Afghanistan and Iraq why public opinion was so hostile to involvement,” Mr Blair wrote.

“Action in Syria did not and need not be as in those military engagements. But every time we put off action, the action we will be forced to take will be ultimately greater.”

He wrote: “The moderate and sensible elements of the Syria opposition should be given the support they need; Assad should know he cannot win an outright victory; and the extremist groups, whether in Syria or Iraq, should be targeted, in coordination and with the agreement of the Arab countries.

“However unpalatable this may seem, the alternative is worse.”

Mr Blair said there was a need to “learn properly” the lessons of the last 10 years and urged people to accept that the violent extremism in the region was not a result of Western intervention.

If Saddam had been left in place, he suggested, Syria’s example showed the dictator would probably have gone on to develop weapons of mass destruction.

And there was little doubt that he would have faced an uprising as part of the Arab Spring - risking a “full-blown sectarian war across the region”.

“So it is a bizarre reading of the cauldron that is the Middle East today to claim that but for the removal of Saddam we would not have a crisis.

“The fact is that as a result of the way these societies have developed and because Islamism of various descriptions became the focal point of opposition to oppression, the removal of the dictatorship is only the beginning not the end of the challenge.

“Once the regime changes, then out come pouring all the tensions - tribal, ethnic and of course above all religious; and the rebuilding of the country, with functioning institutions and systems of Government, becomes incredibly hard.”

He compared Iraq with Libya, where the international community forced out dictator Muammar Gadafy but did not send in troops and which was now violent, unstable and a source of wider regional trouble.

And Syria - where the world called for regime change but declined to enforce it - was “in the worst state of all”, he suggested.

Mr Blair complained of inconsistency in the approach to each.

“Gadafy, who in 2003 had given up his WMD and cooperated with us in the fight against terrorism, is removed by us on the basis he threatens to kill his people but Assad, who actually kills his people on a vast scale including with chemical weapons, is left in power.”