Analysis: Iraq’s prime minister needs to retake the city to maintain the support of Shias 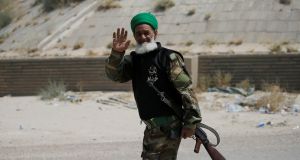 Iraqi forces are going slow while advancing on Islamic State fighters controlling the iconic city of Falluja in a battle long postponed by Baghdad.

The go-slow is necessary because the jihadis have mined the approaches and the UN estimates there are at least 50,000 civilians in the city, who are prevented from leaving. Baghdad cannot afford huge casualties among soldiers or civilians.

A conservative Sunni city with up to 300,000 inhabitants before the takeover by Islamic State – also known as Isis – in early 2014, Falluja is iconic because it resisted post-first World War British rule and the 2003 US occupation.

A November 2004 US assault on Falluja was the bloodiest for US servicemen since the Vietnam war. Homes, schools, mosques and hospitals were destroyed and residents suffered illness attributed to US munitions.

Fallujans have good reason to hate the US and the exiles who rode into Baghdad on the backs of US tanks, particularly Shia fundamentalists who dominate the Iraqi regime.

During the eight-year rule of prime minister Nouri al-Maliki, who was forced out in 2014, Sunnis were marginalised and persecuted.

Falluja responded by rebelling under the banner of al-Qaeda and succumbing to its offshoot, Islamic State.

This is why Baghdad put off the Falluja campaign until now.

Baghdad cannot procrastinate further. Falluja is of strategic importance and is the last major city to be held by Islamic State in the Sunni-majority western Anbar province, the largest in Iraq with borders to Syria, Jordan and Saudi Arabia.

Regarded as weak, Abadi has no choice but to secure Falluja or lose support among Shias angered over his failure to tackle corruption and provide water and electricity ahead of Iraq’s long hot summer.

Reopening the highway – Iraq’s main land trade route – became a realistic prospect this year when the Iraqi army and allied forces recaptured Ramadi, 60km from the capital, which had also fallen to Islamic State in 2014.

To enter Falluja and Mosul, Abadi has to rely on an uncertain alliance between the Iraqi army and Sunni levies rather than Shia militias which have killed civilians and cleansed Sunni towns and villages.