US and Iran have joined soldiers, militiamen and tribesmen in crucial campaign for strategic city

Iraqi security forces fired on a town being held by Islamic State (IS) militants in Iraq's northern central province of Salahudin on Sunday. Video: CCTV 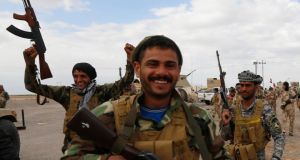 Members of the Iraqi security forces and Shia fighters celebrate after taking control of the town of Hamrin from Islamic State militants, on Tuesday. Two of the Shia militias most feared by Sunnis are taking part in the ongoing offensive to take Tikrit. Photograph:Thaier Al-Sudani/Reuters

Iraq’s offensive against Islamic State fighters holding the strategic city of Tikrit is a test for the Iraqi army, allied Shia militias, the Shia fundamentalist-dominated government and Iran.

The operation, launched on Monday with fanfare, has already stalled due to mines, roadside bombs and suicide bombers as the US and Iran compete for influence over the country’s diverse armed forces.

Between 10,000 and 15,000 soldiers, 10,000 and 15,000 Shia militiamen and 2,000 Sunni tribesmen are deployed according to a plan drawn up by Iranian general Qassim Suleimani, commander of the elite Quds Force of Iran’s Republican Guards. They are backed by 120 frontline Iranian military advisers.

The US and its coalition partners continue to fly anti-IS missions elsewhere in Iraq and Syria, but they have not been asked to take part in the crucial battle for Tikrit, seen as the prelude of the Mosul campaign, provisionally scheduled for April or May.

The Iraqi government has criticised the US for mounting a limited number of daily missions rather than scores or hundreds of strikes, as it did during Washington’s 1991 and 2003 wars on Iraq. Iran has earned praise by its growing presence on the ground.

Tikrit is a strategic asset for both sides. The city straddles the highway to Mosul, the main supply route for government forces once Baghdad launches the far more demanding campaign to retake Mosul, Iraq’s second largest city. For IS, Tikrit is a launch pad for an assault on Baghdad.

Tikrit is also an iconic city for Iraqis. It was the home base of Saddam Hussein, who was born nearby, and it is the birthplace of Salaheddin (Saladin), the great Kurdish commander who recaptured Palestine and Jerusalem from the Crusaders in 1187.

Kurdish media have reported that thousands of residents have streamed out of the city and made for the Kurdish autonomous region in the north. The fate of civilians who remain, tribesmen who have backed IS, and IS fighters could decide whether the battle for Tikrit deepens the already deep Sunni-Shia sectarian divide in Iraq.

This could depend on Suleimani, who has been at the front since the Iraqi offensive began on Monday. If the general fails to heed an appeal by Iraq’s interior ministry to rein in Shia militiamen and prevent mass killings, Sunnis elsewhere are likely to join IS in resisting assaults by the militia-backed military on other cities.

Two of the Shia militias most feared by Sunnis are taking part in the offensive. The Iranian-formed Badr Organisation, headed by Hadi al-Amiri, Iraq’s transport minister, and Asa’ib Ahl al-Haq, an offshoot of the Mahdi Army of radical Shia cleric Muqtada al-Sadr, require firm control as they stand accused by Sunnis of atrocities and sectarian cleansing.

To gain credit with the population, Shia militias must not breach the rules of war when dealing with captured IS fighters and their allies.

Shia militiamen could be tempted to retaliate for an IS massacre of 770 captives, including soldiers, at a base near Tikrit last summer.

In January, Shia militiamen slaughtered 72 unarmed Sunnis while Iraqi security forces stood by at the village of Barwanah, which was hosting refugees from IS-held villages.

The decision to undertake the Tikrit offensive before the army is deemed ready, particularly without US airpower, is risky for Iraq’s prime minister, Haidar al-Abadi, as well as for Suleimani and Iran.

If government forces fail to take Tikrit or capture the city and slaughter Iraqis, these two men and Tehran will be blamed.