Amman letter: Jordan feels like a society that could fracture any day 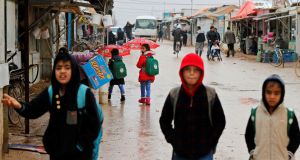 “The future is dark, but in our architectural department, we’re already working on designs for rebuilding Syria some day,” says Raed (26), an architecture student from Damascus.

He and four fellow students from Homs and Daraa have scholarships to study at Jordan’s University of Science and Technology, but despair for their futures. “Maybe we’ll have to work in factories. There’s a small chance of staying here if we did master’s degrees or PhDs, but it’s very expensive to live. We’ll probably have to emigrate to a Gulf state. We just want to graduate and work,” says Ahmad, a civil engineering student also from Damascus.

The uninviting grey-brown apartment blocks thrown up beside the main roads in several directions through the outskirts of Amman suggest their skills could have been put to better use here. The buildings are unlikely to last anywhere near as long as the Roman ruins of Jerash.

Some 70 per cent of Jordanians are under 30, but the country’s economy, weakened by the war in Syria that wiped out both a market and a vital export route, has little more than flatlined since 2011. Unemployment is over 15 per cent, but it’s 75 per cent among graduates; and the poverty level is over 20 per cent. One in three of the nine million people living here are refugees from Iraq, Syria or Palestine, with smaller groups from Yemen and Libya.

An hour’s drive away at the Zaatari refugee camp – home to 80,000 Syrians, a quarter of them children, with 17 babies adding to that every day – there are 2,500 shops, workshops and small businesses selling everything from wedding dresses to household appliances. Largely closed off to the wider economy, without integration they will struggle and won’t grow, something NGOs have begun to recognise.

In a tent half-an-hour’s drive away in Irbid, Princess Sumaya has launched a “Fablab” space, complete with the latest 3D printing technology and co-working and innovation space. She champions Assem Hasna, a former refugee who hacked a printer, then taught others to use it for making medical prosthetics that cost just a dollar compared to their $35 market price.

He has just been offered a job by tech giant Cisco, we learn. The hope is that both Syrians and Jordanians will emulate his success. “Human talent is our nation’s greatest asset. Innovation can be our salvation,” the Princess said.

But Jordan feels like a society that could fracture any day. Amid the instability of the region, the story its politicians and royal family tell about it being Jordan’s destiny throughout history to host refugees with a proud, welcoming and resilient outlook isn’t enough to sustain its people through a lost half-decade.

“We’ve had a perfect slow-moving storm, where everything that could go wrong around us has done so. It’s unprecedented for what is a low- to middle-income country like Jordan,” says planning and international co-operation minister Imad Falkhoury, though his own political class may not exactly be sharing the burden.

His ministerial car being a €100,000 Tesla may not send quite the right message; in a similar vein, the family of a former prime minister was recently gifted with free flights for life on the national airline.

In 2011, a rise in anger and anti-monarchial sentiment saw large public demonstrations in the streets of Amman and there’s a feeling that these could happen again. More recently, hundreds of Jordanians are known to have joined the Islamic State terrorist group and there are several thousand sympathisers in the country. Recently, 10 people including a Canadian tourist died after a shoot-out with gunmen at a medieval castle.

Plummeting tourist numbers also hastened the economic decline here since 2011, and had only just began edging up after a renewed focus on new markets, after a 66 per cent crash. Fragile anyway, the latest attack jeopardises them again.

Jordanians’ anger and dissatisfaction at their rulers and politicians over not being able to keep them safe would risk tipping their homeland into a cycle of instability that is unfortunately all too common in this part of the world – and one that Raed and his friends would find themselves sadly confronted by once again.