Aid efforts to Iraq’s Mosul must step up, says Flanagan 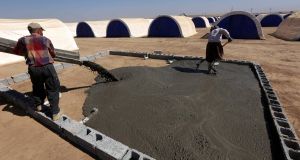 Workers lay concrete as they build shelters in Hasan Sham village, some 45km east of Mosul city, to house some of the multitudes of civilians expected to flee violence in the northern Iraqi city due to a planned operation to retake the city from jihadists, October 6th, 2016. Photograph: Safin Hamed/AFP/Getty Images 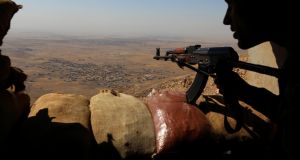 Minister for Foreign Affairs Charlie Flanagan has said the international community must step up humanitarian efforts to assist those in the Mosul area of Iraq as Ireland prepares to dispatch fresh relief supplies to the region.

It follows last month’s provision of €1.5 million to the UN’s Iraq Humanitarian Pooled Fund which finances life-saving humanitarian assistance throughout the country.

Mr Flanagan said he is gravely concerned up to 1.5 million people in the city of Mosul have been living under siege for more than two years, with a further 1 million in surrounding areas currently under Islamic State (Isis) control.

“Tens of thousands of people have been displaced in recent weeks and further massive population displacement is expected as the conflict between Iraqi government forces and Isis intensifies around Mosul,” he said in a statement.

“I call upon the international community to urgently scale up its response efforts along the Mosul corridor.”

Ireland’s airlift on Friday comprises over 34,000 relief items worth €450,000. It will be dispatched from the UN Humanitarian Response Depot in Dubai, where Irish Aid pre-positions supplies for use in emergencies and humanitarian crises.

They are due to arrive in Erbil on Friday and will be distributed by Oxfam to vulnerable populations displaced by the conflict.

Also announcing the latest aid round was Minister of State for the Diaspora and International Development, Joe McHugh, who said intensified fighting in the Mosul area will increase risks to civilians and families trying to escape.

“Urgent action is required to provide emergency shelter and protection, water and sanitation, and food and medical assistance to the newly displaced,” he said.

In addition to funding and relief supplies, Irish Aid recently deployed a member of the Rapid Response Corps to provide essential surge capacity to the UN’s Office for the Co-ordination of Humanitarian Affairs in Erbil.