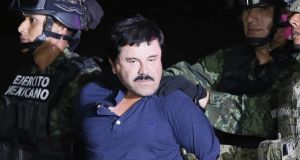 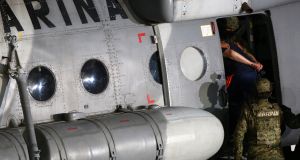 Joaquin Guzman, the world’s most wanted-drug trafficker boarding a helicopter at a Navy hangar in Mexico City on Friday. Photograph: Susana Gonzalez/Bloomberg

Mexico recaptured the world’s top drug lord Joaquin “El Chapo” Guzman in a pre-dawn shootout and chase through drains on Friday, returning him to the same prison he escaped from six months ago, in a boost for the beleaguered government.

The head of the powerful Sinaloa Cartel was captured in a car wearing a filthy vest after fleeing through tunnels and drains from a raid on a safe house in the city of Los Mochis, in his native northwestern state of Sinaloa.

“Mission accomplished: We have him,” president Enrique Pena Nieto said on his Twitter account. “I want to inform all Mexicans that Joaquin Guzman Loera has been arrested.”

For Pena Nieto, the capture of a trafficker who twice slipped out of Mexican prisons is a sorely-needed victory after his presidency was tarnished by graft and human rights scandals and the shame of the kingpin’s flight from the maximum security Altiplano prison in July.

It also provides relief to US-Mexico relations, strained by suspicion of high-level collusion given the apparent ease with which Guzman gave Mexican authorities the slip after the United States requested his extradition.

Guzman now faces possible extradition to face trial in the United States. That process could take months, although US Republican party presidential hopeful Marco Rubio was among those calling for Washington to immediately pursue extradition.

Once featured in the Forbes list of billionaires, Guzman led a cartel that has smuggled billions of dollars worth of cocaine, heroin, marijuana and methamphetamines into the United States and fought vicious turf wars with other Mexican gangs.

He was caught early on Friday after Mexican marines raided his safe house, killing five and capturing six of Guzman’s henchman. They pursued the drug lord through the northern city’s drains and caught him after a car chase through the outskirts, Attorney General Arely Gomez said.

He was flown to Mexico City and later transferred in a naval helicopter back to the Altiplano.

Guzman, whose nickname means “Shorty”, first escaped prison in 2001 by bribing prison officials, and went on to dominate the world of Mexican drug trafficking.

He was recaptured by Pena Nieto’s government in 2014 but escaped in July by capitalizing on the drug-tunneling skills his cartel honed on the US border. A mile-long tunnel equipped with electric lights, rails and a motorbike came out directly into the shower of his prison cell and he simply slipped away.

The escape heaped embarrassment on Pena Nieto, who had resisted a US request to extradite Guzman and had said previously that an escape would be “unforgivable.”

Dozens of people were arrested over the jailbreak, though details of who Guzman bribed and how his accomplices knew exactly where to dig into the prison remain scarce.

His recapture on Friday involved Mexican marines, the US Drug Enforcement Administration (DEA) and US Marshals, a senior Mexican police source and a US source said.

“Another important aspect which helped locate him was discovering Guzman’s intention to have a biographical film made. He contacted actresses and producers, which was part of one line of investigation,” Mr Gomez said.