Jihadist attacks in 2015 reveal ‘enemy from within’

World review of the year: Isis planned and ‘inspired’ some of the atrocities this year 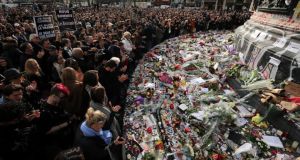 A minute’s silence in Paris for the victims of the November terror attacks which claimed the lives of 130 people. Photograph: Christopher Furlong/Getty Images

It was as if the nightmares of New York on 9/11, Madrid in 2004 and London in 2005 had returned with a vengeance. Jihadist attacks opened and closed 2015, claiming the lives of 17 people in Paris between January 7th-9th and another 130 on November 13th. Hundreds more perished in the intervening months, from countries as far-flung as Kuwait, Saudi Arabia, Lebanon, Tunisia, Mali, Russia and the US.

We had almost grown accustomed to the brutality of Islamic State within its self-proclaimed caliphate: the slaughter of Kurds, Yazidis, Shia Muslims and Christians; the selling of women captives as sabaya (slaves); the videotaped decapitation of western hostages and crucifixions on Naim square in Raqqa, the group’s “capital” in northern Syria.

But the selfish dread, the sense of vulnerability, were more immediate. Tourists off a cruise ship were hunted down and left in pools of blood in the world’s finest museum of Roman mosaics in Tunis. Holiday-makers were shot dead in their swimming togs on a Mediterranean beach. Young people were mown down on café terraces and at a Paris rock concert. No place was safe.

Said and Chérif Kouachi murdered cartoonists and journalists at the weekly editorial meeting at Charlie Hebdo, then finished off a wounded policeman as he was sprawled on a Paris pavement. They had trained in Yemen, not Syria, and credited al-Qaeda in the Arabian Peninsula.

Amedy Coulibaly, their accomplice who shot dead a policewoman, then besieged the kosher supermarket, claimed five murders on behalf of Islamic State. With their dual attributions, the January attacks seemed to symbolise the shift from old-school al-Qaeda jihadism to the newer, ultra-violent Islamic State.

This year marked the ascendancy of the “enemy from within”. The Kouachis, Coulibaly and most of the November 13th attackers were French citizens. Abdelhamid Abaaoud, the “mastermind” of November 13th, was Belgian.

The “enemy from within” was all the more terrifying because he – or she – blended in. Brahim and Salah Abdeslam, French citizens resident in the Molenbeek quarter of Brussels, ran a café that sold wine, beer and hashish. Brahim detonated his suicide belt on November 13th. Salah is still on the run.

Syed Rizwan Farook and Tashfeen Malik left their six-month-old daughter with her grandmother before donning combat fatigues and fatally shooting 14 people at an office Christmas party in San Bernardino, California. Farook, a US citizen, had visited the social services centre in his job as a state health inspector.

Some of the 2015 atrocities were clearly planned by Islamic State. Others, including the rampage by Farook and Malik, were merely inspired by the group. Such attacks are almost impossible to foresee or prevent. The couple had no police record, had apparently self-radicalised and committed mass murder on their own initiative. In Baghdad in the 2000s, al-Qaeda in Iraq – the predecessor to Islamic State – specialised in synchronised attacks. The psychological equivalent of storming the trenches, the practice leaves civilians and security services stunned and disorientated.

On June 26th, Yassin Salhi beheaded his boss at a transport company south of Lyon, impaled his head on a fencepost and tried to blow up a chemical factory. My editors and I were discussing my departure for Lyon when news started coming in of the beach massacre that claimed 39 lives in Sousse. I flew to Tunis instead.

A third attack, also claimed by Islamic State, killed 27 people in a Shia mosque in Kuwait City that same day.

On November 13th, I was dining with colleagues when we heard there had been an explosion at the Stade de France. The attackers seemed to hop-scotch around Paris: shootings in the 10th and 11th districts, a hostage-taking at the Bataclan concert hall. The confusion eventually settled to reveal six separate attacks within 33 minutes.

The group’s admission of responsibility for the November 13th attacks harked back to the Middle Ages, referring repeatedly to the French as “crusaders” and to France as “the carrier of the banner of the Cross in Europe”.

Sources at the highest levels of the French government say they expect more attacks. Because of its colonial past, France has the largest Muslim population in Europe and provides the most foreign recruits to Islamic State. It has proved incapable of integrating generations of Muslim immigrants, a problem made more intractable by the attacks.

Fear as an issue

In the aftermath of the San Bernardino massacre, Donald Trump, the leading candidate for the Republican presidential nomination, said he wants to bar all Muslims from entering the US and “kill the families of terrorists”.

The US-led coalition against Islamic State carries out some 100 sorties daily, of which three-quarters target the group in Iraq, not Syria. By comparison, Nato flew 800 air raids a day against Serbia in the 1999 Kosovo war. The containment operation is meant to halt the progression of Islamic State, but it failed to prevent the fall of Ramadi and Palmyra last spring.

Fear of civilian casualties is one reason for the timid campaign. The absence of ground soldiers to hold territory if Islamic State retreated is another.

The deployment of frigates, aircraft carriers and fighter-bombers may pin the group down in Iraq and Syria, but is no more effective in preventing attacks like those seen this year than the Maginot line was in stopping German panzers.

Gilles Kepel, the author of Terror in the Hexagon; Genesis of French Jihad, believes that just as the US government’s mass retaliation for 9/11 crippled al-Qaeda, the November 13th attacks in Paris may have been a bridge too far for Islamic State.

Four of five UN Security Council members now participate in military operations against Islamic State and, on December 15th, the Saudi government announced the creation of a coalition of 34 Sunni Muslim countries “against terrorism”.

The past silence of Saudi Arabia and other Sunni nations was often interpreted as a form of complicity. For the first time, Islamic State has been unequivocally condemned by the people it purports to represent. Such isolation is unlikely to prevent further attacks, but it’s a small step in the right direction.