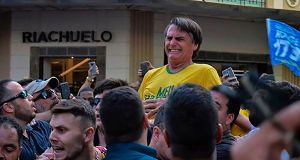 Knife attack: Jair Bolsonaro grimaces after being stabbed in the stomach on Thursday. Photograph: Raysa Leite/AFP

The far-right candidate in Brazil’s presidential election, Jair Bolsonaro, remains in a “grave but stable” condition following his stabbing at a campaign rally on Thursday.

The former army captain, who is leading opinion polls, was being carried shoulder high through a throng of supporters in the city of Juiz de Fora when a man with a large knife hidden in a plastic bag stabbed him in the abdomen.

The attack, which was captured live, shocked the country and has thrown what was already Brazil’s most unpredictable presidential contest since 1989 into confusion, with most other candidates announcing a temporary halt to campaigning.

The alleged assailant, Adelio Bispo de Oliveira (40), was detained at the scene and later said he carried out the attack “by order of God”.

Despite indications that the attacker suffered from paranoid delusions, Mr Bolsonaro’s supporters have seized on his previous membership of a small left-wing party as evidence the attack was politically motivated.

The single stab wound perforated Mr Bolsonaro’s intestines in three places and caused internal haemorrhaging. He was quickly brought to a hospital in Juiz de Fora, where he was operated on before being transferred on Friday morning to São Paulo for further treatment.

Beforehand he managed to record a video message in which in a weak voice he thanked God and his doctors. “Can human beings really be that bad? I never did harm to anyone,” he said in the clip, which was released by a senator ally.

Arguably the most controversial figure in Brazilian politics since the return of democracy in the 1980s, Mr Bolsonaro was charged in April with racism by Brazil’s chief federal prosecutor over comments from last year. The prosecutor said a speech he made amounted to incitement to hatred and prejudice against various groups. Earlier this week the supreme court again suspended its decision on whether to accept the case against him.

Mr Bolsonaro has also faced allegations of using public office for personal enrichment despite his bid for the presidency being driven in large part by his thunderous criticism of the widespread corruption of the country’s political class.

He recently was forced to dismiss the woman who helped look after the dogs at his summer house after it was revealed that she was registered as a member of his parliamentary staff in Brasilia. Brazilian media have also highlighted the unusual increase in his family’s wealth in recent years, and Mr Bolsonaro’s name has been cited in several corruption cases, although he has never been charged.

He has dismissed the accusations of impropriety levelled against him as slander.