It’s Canada Day! Here’s 10 reasons why we should be thankful

The best of Canada includes the food, the people and, of course, the view 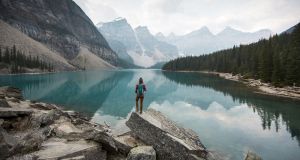 Rumours persist that Santa Claus is a Canadian citizen; this has yet to be proven.

Here’s 10 reasons why we should celebrate that Canada exists in our world.

1. Oh Canada: the truly sophisticated are never too constrained to take a second look and, earlier this month, Canada duly did – under its new prime minister Trudeau, son of a famous former prime minister father – reconsider the increasingly contentious lyrics of the national anthem.

The phrase “all our sons” has now been changed in the English-language version to the more gender balanced “all of us.” The French version had previously been amended.

2. Northern Dancer: one of the most successful Thoroughbred stallions of all time, the mighty bay Northern Dancer, son of Nearctic out of Natalma, a daughter of Native Dancer. Northern Dancer was the first Canadian bred horse to win the Kentucky Derby. It was a performance which showcased his determination as he came from well back in the field to storm to victory. Every cliché about the best goods coming in small parcels applies to Northern Dancer, foaled in 1961, was overlooked when he went to sale as a youngster.

In addition to winning the Kentucky Derby in 1964 he also won the Preakness Stakes that year. At stud, he was invincible and sired 147 stakes winners. The Vincent O’Brien trained Nijinsky winner of the English Triple Crown may well remain his most famous son, yet among his gifted progeny are other racing and stud immortals such as Danzig, El Gran Senor, Sadler’s Wells, Storm Bird and others. Northern Dancer retired from stud at 26 and died three years later in 1990 at 29 following a severe colic. His remains were brought home to Canada. His legacy dominates the history of horse racing.

3. Ice Hockey: or, to be strictly correct - Hockey. Admittedly not a game for the faint hearted, yet this high-speed contact sport – or open combat – with its echoes of the gladiators of old brings to mind knights jousting as well as every school girl game ever played - because as everyone knows, school girls play a far tougher, more savage style of field hockey than their weaker male counterparts.

Ice hockey does bear similarities with hurling, only ice hockey is obviously, due to the skates, even faster. Be it known that although the game actually originated elsewhere – it was first codified in Canada, in Montreal in about 1876 and that date marks when it formally emerged. It’s also vital to stress that in Canada and the US, it is called hockey – not ice hockey.

Canada dominated the sport at Olympic level until the Soviet Union and other Eastern European countries began pumping vast resources into it and Canada appeared to decline. However, it has revived and to date has won 13 Olympic gold medals. Standing in goal during an ice hockey game, facing the opposition approach, is probably the loneliest place on earth. (Psst a Canadian, James Naiswith, invented basketball.)

4. The magnificent landscape: Bounded by three oceans – the Pacific on the west, the Arctic on the north and the Atlantic on the east, Canada, the world’s second largest country, is the proud possessor of vast tracts of unspoilt wilderness, while the Niagara River which forms part of the Canada-US border, issues from Lake Eyrie and flows northward to Lake Ontario . . . the Canadian or the Horseshoe Falls are more than twice as broad if slightly lower than the American Falls – but no one could dispute that the Niagara Falls remains one of the world’s most spectacular natural wonders.

5. Glenn Gould: Twitching, scratching, mumbling and singing along as he played while sitting on his specially constructed stool, pianist Glenn Gould (1932-1982) was an eccentric individual with a range of mannerisms which often distracted from his playing. Making his debut with the Toronto Symphony Orchestra at the age of 14, he retired from the concert platform in 1964, at 32, to concentrate on recording and broadcasting.

His greatest achievement was his commitment to the keyboard repertoire of J.S.Bach. The opening bars of Bach’s Goldberg Variations are carved upon Gould’s tombstone.

6. Winnie the Pooh: Just when Britain is so seriously under pressure, what with voting itself out of Europe – much to the horror of almost half of its thinking electorate – and then came a curt exit from Euro 2016 courtesy of Iceland, a tenacious nation with a population about equal to Drogheda, comes a further blow, the reality that the much loved consumer of vast amount of honey is not actually British.

The real life Winnie was a Canadian bear sent from Winnipeg zoo to its London counterpart in Regent’s Park. A little boy named Christopher Robin was so greatly taken with the black bear, Winnipeg, or Winnie for short, declaring it his absolute favourite that his father, the writer, AA Milne, immortalised his son’s affection for the creature in Winnie-the-Pooh (1926) and its sequel, The House at Pooh Corner (1928). The 60th anniversary of the writer’s death in 1956 falls this year, while the little boy died aged 76, 30 years ago this year.

As for the Canadian bear; thanks to the combined efforts of Milne senior and the Disney studios, nor forgetting the obvious life-enhancing properties of honey, he will live on for ever.

7. Christopher Plummer: This gifted and versatile actor has proven he can play a suave baddie as well as a romantic lead. He has a wonderful speaking voice and a refined sense of irony. To many, he is best known as Captain Von Trapp in The Sound of Music (1966) and although my initial preoccupation with the movie was how come Maria’s singing of The Hills Are Alive could be heard above the noise of the aircraft carrying the camera, the romantic allure of Von Trapp, played by Plummer, eventually became apparent.

Winner of an Academy Award for Beginners, he has been Iago and Macbeth, he was a wonderfully demented Wellington in Waterloo (1970) and featured in The Insider (1999) and A Beautiful Mind (2001). Born in Toronto, he is now 86 and was Leo Tolstoy in The Last Station. His portrayal of Von Trapp suggests that he would have been a superb Mr Darcy.

8. Leonard Cohen: singer, song writer, poet and novelist, Cohen is also a remarkable performer known for his gracious and generous approach to his audiences. He also heads an outstanding Canadian contingent of singer songwriters such as Neil Young, Joni Mitchell, Gordon Lightfoot. k.d. lang and the astonishing self-produced, self-written, self-directed, self everything project known as Grimes who recorded her fourth album, Visions, alone in her apartment.

9. Canadian food: Canadian writers are internationally revered and we have a list honouring them, do please consult it should you wish; literature feeds and sustains the mind but food is more practical. A nation marches on its stomach and one of the great energy fuels of our time, peanut butter, was first patented in Canada.

While words are insufficient when it comes to the gastric delight of Maple Syrup. Small wonder Canadians when travelling abroad proudly bear the maple leaf symbol.

10. Angela Hewitt: Another splendid Canadian exponent of the music of Bach, pianist Angela Hewitt returns to Ireland in September, when she performs an all Bach programme in St Peter’s Church of Ireland, Drogheda, on Thursday September 22nd, for the opening concert of the 2016/17 Drogheda International Classical Music Series.