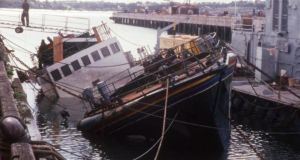 The Rainbow Warrior was heading for the Mururoa Atoll in the south Pacific, where France was planning a series of nuclear tests. Photograph: Patrick Riviere/AFP/Getty Images

An apology by a French spy for the fatal bombing of a Greenpeace ship 30 years ago has been welcomed by an Irish crew member of the vessel.

However, Grace O’Sullivan from Tramore, Co Waterford, who was on leave when the Rainbow Warrior was sunk by French intelligence agents in Auckland harbour in July 1985, expressed her anger at the French government for the “brutal arrogance” that led to the death of photographer Fernando Pereira.

Diver Jean-Luc Kister, who put a mine on the ship, this week apologised to Mr Pereira’s family, to the Greenpeace crew and the people of New Zealand “for what I call an accidental death but what they consider an assassination”.

Ms O’Sullivan, who ran for the Green Party in Ireland South in the 2014 European elections, said she was told of the apology in an email from Peter Wilcox who was captain of the Rainbow Warrior at the time.

She said Mr Pereira’s death was “beyond devastating” for his family, friends and crew members. “It reminds me of he sadness of what happened . . . the fact that his two children have had to grow up without a father,” she said.