Brazilian police say they have 'overwhelming' proof that Pat Hickey and Kevin Mallon led an illegal ticketing ring at the Rio Olympic Games and are preparing to make a formal accusation. Video: Reuters 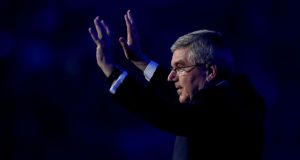 President of the International Olympic Committee Thomas Bach did not attend the opening of the Paralympics. Photograph: James Crombie/Inpho

Pat Hickey, president of the Olympic Committee of Ireland, and Dublin finance director of UK sports hospitality company THG Sports Kevin Mallon have been formally charged in Brazil over their alleged roles in the affair.

The charges include supplying tickets for the purpose of touting, false advertising, fraud, money laundering and tax evasion.

Police claim they plotted with others to transfer tickets illegally from a sports company called Pro 10 to THG Sports, which was a non-authorised vendor. Police investigators said the scheme could have netted $3 million.

Police investigator Aloysio Falcao said authorities want to speak to Mr Bach about exchanges between him and Mr Hickey related to ticket allocations to Ireland.

Text messages seen by The Irish Times show Mr Hickey personally lobbied Mr Bach for more tickets for high-profile events at the Rio Games. He texted Mr Bach in July of last year comparing the OCI ticket allocation for Rio unfavourably with the one it had received for the London Games in 2012 and sent a “wish list” of significantly more tickets for some of the Games’ most sought-after events, including the opening and closing ceremonies, the men’s football final, the men’s basketball final and the men’s 100 metres final.

It is not clear if Mr Bach replied or took any action relating to Mr Hickey’s request.

Mr Falcao said police had planned to “summon” Mr Bach when he came to Rio for Wednesday’s opening ceremony of the Paralympics, adding that authorities have no evidence that he knew of the alleged ticket scam.

However, Mr Bach cancelled plans to attend the opening. The IOC said he would be in Germany instead for the official state mourning ceremony for former West German president Walter Scheel, who died last month at the age of 97.

The Brazilian newspaper Globo said Mr Bach would be subpoenaed as a witness if he came to Brazil.

“The IOC cannot comment on a newspaper story nor on the ongoing legal procedure against Hickey for whom the presumption of innocence prevails,” the IOC said in a statement. “For the IOC it goes without saying that it will co-operate on this matter.”

Mr Hickey has temporality stepped aside from all his Olympic roles - IOC member, IOC executive board representative, OCI president, head of the European Olympic Committees and vice president of the Association of National Olympic Committees.

The other suspects include businessmen with Pro10 and THG Sports who are not in Brazil, including Marcus Evans, who owns THG Sports’ parent company, as well as football club Ipswich.