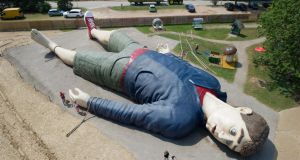 Workers are busy next to a figure of Gulliver at Gulliver’s World amusement park in Pudalga on Usedom island, Germany. Photograph: Stefan Sauer/ AP Photo

The man lies motionless in the sand – 36 metres long, 17 metres wide and five metres high – is wearing a blue jacket and green shorts, and is missing a red runner. Judging from his pained expression, he’s not happy to be here.

Jonathan Swift may have been Irish but yesterday his famous explorer Lemuel Gulliver was washed up on a beach in Germany. Just in time for the holiday season, visitors to the Baltic Sea island of Usedom can now be Lilliputians for a day and visit the shipwrecked giant, still tied to the ground. Presuming he doesn’t object, they can climb into his hand and knee. If enough would-be Lilliputians come, there are plans to allow them take a travel into Gulliver himself, to his beating heart.

The massive polystyrene-and-plastic statue is the brainchild of Polish businessmen Sebastian Mikiciuk und Klausdiusz Golos, already famous in the Baltic Sea resort for their “House on its Head” attraction.

“We wanted to build something that didn’t exist yet,” said Mr Mikiciuk of their decision to build a statue that weighs 12 tonnes and required 200 litres of paint.

After exploring the giant, visitors can have a look at his oversized cutlery, climb on his missing three-metre-long runner and have a run around a field with three-metre high mushrooms.

“These days with the internet it’s harder and harder to enthuse people and attract visitors,” said Maik Gebauer, operations manager of “Gulliver’s World”. “But people have so far been delighted, some even surprised, to discover Gulliver lying there.”

Mr Gebauer said the shipwrecked traveller was well-known in Germany, but more because of all the film adaptations over the years than the original book.

“Lots of people know he was created by Jonathan Swift,” he said, “though not many know he’s Irish. But we’ll be happy to point that out.”