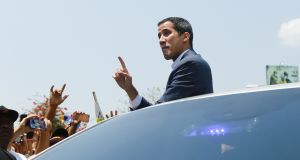 Launching a nationwide tour as part of a “new phase” of what he terms Operation Freedom, Venezuela’s opposition leader Juan Guaidó called on Saturday for a national mobilisation to retake the country’s presidential palace.

He said the opposition-controlled national assembly would organise freedom committees in every street which, when ready, would mobilise supporters to descend on the Miraflores palace in the capital Caracas.

“These are the steps to achieve the end of the usurpation,” he told a rally in the city of Valencia, referring to what the opposition labels President Nicolás Maduro’s illegal occupation of the executive.

Citing the country’s constitution, Guaidó declared himself president in January after Maduro was sworn in following an election last year that was widely dismissed as lacking legitimacy. He has since been recognised as Venezuela’s rightful leader by over 60 countries, including most of its neighbours in the western hemisphere.

Part of Operation Freedom would include seeking to work with “constitutional forces” within the military and other state security forces to guarantee the operation’s success, the opposition said.

Despite a deepening humanitarian crisis that has followed the catastrophic implosion of the economy, Maduro has been able to count on the continued support of the state’s armed forces to stay in power.

Viewed as one of chavismo’s most intransigent figures, and accused of participation in cocaine-trafficking schemes by leading regime members, Cabello asked supporters on Saturday: “Are we going to permit that the palace of the people is transformed once again into a palace of business for the oligarchy, for the bourgeoisie? We cannot let that happen.”

He spoke as chavismo mobilised its own supporters in Caracas. Over a week after a massive power failure cut electricity to much of the country causing water supplies and telecommunications to fail, chavismo has still failed to provide evidence supporting its claims that the US and Guaidó were responsible for the blackout.

In an effort to break the deadlock in his stand-off with chavismo, Guaidó also endorsed a suggestion that leading figures in Maduro’s government could go into exile in Spain after breaking with Maduro.

The US government’s point man on Venezuela, Elliott Abrams, said Washington had already held conversations with Spanish officials about such a possibility. In an interview with Spanish newspaper ABC, Abrams said states supporting Maduro would be the logical destination for chavistas going into exile “but nobody wants to live in Cuba or Russia”.

The Russian government said it would hold talks on Venezuela with Abrams in Rome on Tuesday. Moscow has emerged as Maduro’s most important international backer during the current crisis and is implacably opposed to any US military intervention to resolve the crisis.

Despite opposition from its allies in the region to the use of force, Washington says “all options” remain open to it as it seeks to eject Maduro from power.