France on collision course with Brussels over budget 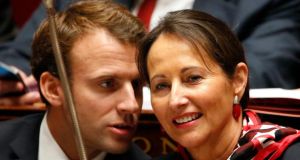 For at least the next two weeks, President François Hollande will be caught in a vice between the French left, who claim the budget is “unjust”, and his European partners, who are losing patience with France’s refusal to make deeper spending cuts or undertake genuine structural reforms, particularly of the labour market.

“How was the postponement used?” Mr Dijsselbloem asked on October 9th. Since France had not used the grace period to enact reforms, “we should not do it again”, he added.

Many of the cuts totalling €21 billion in the draft budget remain vague. For example, between €2 billion and €3 billion in cuts from social expenditure have not yet been detailed. And the government bases its predictions on a 0.7 per cent increase in demand – pure wishful thinking, experts say.

Other Europeans, particularly those who have made sacrifices to comply with the EU’s stability and growth pact, are frustrated. “The rules must be the same for everyone,” Austrian finance minister Hans Jörg Schelling said on Monday. “Every country must put its own house in order, as Austria did.”

To make matters worse, Paris has sent mixed signals in the run-up to the EU budget deadline. Prime minister Manuel Valls and economy minister Emmanuel Macron have repeatedly made social democratic, market-friendly statements about reforming the French labour market, only to be disavowed by the Élysée at the first sign of protest.

At the same time, ecology minister Ségolène Royal caved in to pressure from lorry drivers and annulled the “écotaxe” , at a cost of €1.4 billion in lost revenue.

France’s attitude has aggravated tension with Brussels. Cabinet ministers often evoke economic sovereignty. “France must be respected. It is a great country. I do not accept lessons in management,” Mr Valls said.

“There is no evidence they can point to of structural reforms,” a high-ranking European diplomat said. “There’s an element of being provocative.”

The EU has never carried out a provision for sanctions against members who violate the stability and growth pact, but France may face a severe reprimand from Brussels this autumn.