As head of new party, Kirchner will contest a senate seat in midterm elections 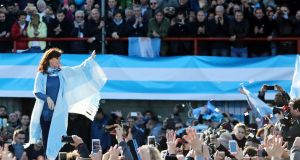 Former Argentine president Cristina Kirchner has announced her return to frontline politics saying she will contest a senate seat in midterm elections in October at the head of a new leftist party.

Ms Kirchner confirmed her candidacy on Saturday, 10 days after the launch of her new party Citizens United, in front of 30,000 supporters at a football stadium in Buenos Aires.

She said her new movement was necessary to fight against “the reinstatement of the neoliberal model” being attempted by current president Mauricio Macri, who succeeded her in December 2015.

October’s midterms are widely viewed as a referendum on Mr Macri’s efforts to impose economic orthodoxy on South America’s second-largest economy after more than 12 years of increasingly populist rule by the Kirchner family, first under Néstor Kirchner who was succeeded by his wife in 2007.

The creation of Citizens United as a separate party is the culmination of a power struggle between Ms Kirchner’s leftist faction of the populist Peronist movement and more conservative elements backed by a majority of the party’s governors.

Ms Kirchner says she will run for her old senate seat in the province of Buenos Aires, home to a third of Argentina’s electorate. She retains strong support among poorer residents of the satellite cities in the rust belt that surrounds the capital who benefited from her administration’s web of social programmes and generous subsidies.

But as well as battling Mr Macri’s right-wing Let’s Change party Ms Kirchner will face competition from two Peronist rivals in the province. Former Kirchner minister Florencio Randazzo will likely lead the rump Peronist movement while Sergio Massa, a former Kirchner ally turned Peronist dissident, will also contest the election risking a three-way Peronist split in what has been historically the movement’s largest source of votes.

Yet Ms Kirchner’s new party looks set to cooperate with its Peronist rivals in other provincial contests meaning she has not fully burnt her bridges with the movement. Therefore a senate win in the country’s biggest electoral district would leave her well placed to become a key voice in selecting the Peronist candidate to face Mr Macri in presidential elections due in 2019.

Taking a senate seat would also provide Ms Kirchner with four years of judicial immunity at a time when she is the subject of several corruption investigations relating to her time in office. But analysts warn a defeat would likely finish off her influence over the fractious Peronists.

The divisions within Peronism provide Mr Macri with the chance to strengthen his influence in the congress which is viewed as crucial to pushing through his ambitious reform agenda. Patchy economic growth has returned since the second half of last year. But inflation remains stubbornly high at 24 per cent following the unwinding of costly subsidies meaning the benefits of a return to economic growth have yet to be felt by most consumers.