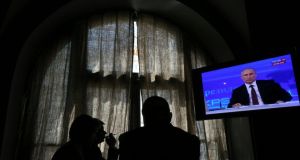 ‘There is a prevailing atmosphere of pessimism in Moscow. Civil society organisations are preparing for a tougher future and no one doubts that further repression is on the way.’ Above, people look at a screen at a media centre during Russian President Vladimir Putin’s live broadcast nationwide phone-in on April 17th. Photograph: Sergei Karpukhin/Reuters 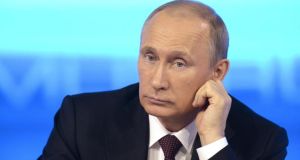 As the political crisis in Ukraine escalates, there has been a corresponding escalation in the cold war rhetoric of official statements within the Russian Federation which increasingly refer to the presence of national traitors and fifth columnists.

Pointing the finger at the enemy within has long been the standard response of a government under siege. The decision by the Constitutional Court to uphold the constitutionality of the Foreign Agent Law (new legislation which obliges NGOs in receipt of foreign funding and which work to influence government policy or public opinion to register as “foreign agents”) as well as the introduction of other restrictive legal amendments, does not bode well for the future of human rights in Russia.

Political developments in Ukraine are presented in Russia as a coup d’etat orchestrated by extremists with the support of western countries hostile to Russia, or even as pure manipulation by Nato. The crisis offers Russian state officials a concrete example of what “too much freedom” means and provides them with justification for further domestic repression.

There is a prevailing atmosphere of pessimism in Moscow. Civil society organisations are preparing for a tougher future and no one doubts that further repression is on the way.

Two days after the referendum in Crimea, President Putin delivered a speech to the upper chamber of the Russian parliament in which he gave his interpretation of events in Crimea as “the triumph of historical justice over the wishes of a western world that had got used to promoting its own agenda, without respect for international mechanisms”.

unification of Russian territory, the president also mentioned internal enemies: “Some western politicians are already threatening us, not just with sanctions but also with the prospect of increasingly serious problems on the domestic front. I would like to know what it is they have in mind exactly: action by a fifth column, this disparate bunch of ‘national traitors’, or are they hoping to put us in a worsening social and economic situation so as to provoke public discontent? [W]e will respond to them accordingly.”

Since late 2012, human rights groups have been depicted in official discourse as “foreign agents”, a retro term from the cold war, when dissidents were routinely labelled as promoting western interests. The recent use of the terms “national-traitors”, and “fifth column”, announces a new level of official hostility. This shift in the public discourse is significant not only because of its symbolic meaning but because it is accompanied by a set of concrete measures that further restrict the space for Russian civil society.

On March 27th, at a meeting with President Putin the chairman of the Federation Council Committee of Constitutional Law, Judicial, and Legal Affairs, and the Development of Civil Society, Andrei Klishas (who is on the EU black list of Russian officials), announced the introduction of a set of new legislative initiatives to prevent a repetition of the Ukrainian scenario inside Russia.

Provisions include amendments to the legislation on NGOs which would reinforce the controversial Bill on foreign agents, introduced in 2012, by giving arbitrary power to the ministry of justice to draw up lists of “foreign agents” without reference to the courts.

Mr Klishas also proposed the introduction of a law that would oblige Russian citizens holding passports of other countries to notify the authorities. Another legislative initiative proposes to restrict foreign travel for Russian citizens. Russian citizens working for international human rights organisations are increasingly concerned for their security, now the Law On Treason includes “financial, technical, advisory or other assistance to a foreign state or international organisation . . . directed at harming Russia’s security”.

Some human rights defenders I talked to recently in Moscow spoke of developing a feeling of paranoia. One of them said, “I have been to war and I was not afraid of being killed but . . . right now I feel . . . that I could hear a knock on my own door one night”.

Klishas also mentioned the need to tighten control of the internet because a “considerable number of persons are involved in anti-constitutional activities”.

Recently, several prominent websites that offered space to dissidents were targeted. On March 12th, the chief editor of independent news website lenta.ru was fired after the publisher received an official warning.


Threat of imprisonment
The next day, the attorney general’s office requested that four other

sites be added to the registry of blocked websites, because they “carry calls to illegal activity”.

A set of restrictive amendments have also been introduced regulating the organisation of peaceful demonstrations. Now, participants in unauthorised public gatherings can be punished by administrative arrest, and, in the event of repeated violations, up to five years imprisonment.

Russia’s best hope lies with those courageous human rights defenders who continue speak out for rights and democracy despite smears and repression. The people who make the difference are those working at local and national level on behalf of their communities. It is important we remember them as the bellicose rhetoric is ratcheted up. Despite his populism, Putin does not speak for all Russians and we should continue to seek ways to provide support and demonstrate solidarity with rights defenders in Russia.