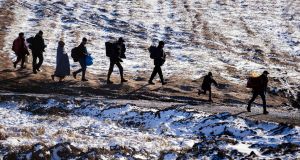 Migrants and refugees walk along snow-covered fields after crossing the Macedonian border into Serbia, near the village of Miratovac, on Tuesday. Temperatures in Syria are forecast to drop to -20 degrees this week. Photograph: Dimitar Dilkoff/AFP/Getty Images

Refugees and migrants crossing the Balkans are at serious risk of major health problems due to freezing winter weather, with large numbers of children facing the greatest danger, international aid groups warn.

Between 2,000-3,000 people still make the perilous sea crossing from Turkey to Greece each day, many arriving cold and wet, and then face several days of travel through Balkan states where snow and sub-zero temperatures are now common.

With public and political pressure building in Germany to reduce the number of asylum seekers entering the country, Austria is expected to start turning back more migrants at its border with Slovenia this week.

Governments throughout the Balkans are warning that a possible “domino effect” of border closures could ripple through the region, trapping thousands of refugees and migrants in countries that are ill equipped to cope.

“With temperatures forecast to drop to as low as -20 degrees in Serbia this week, children travelling along the refugee route are at risk of hypothermia as well as pneumonia and other potentially fatal respiratory illnesses,” Save the Children warned.

“Aid workers at the [Serbian] border reception centre in Presevo say there is six inches of snow on the ground and children are arriving with blue lips, distressed and shaking from the cold. Exhausted mothers say they are unable to keep their babies warm and dry, and are slipping over while carrying them on the icy roads,” it said.

The United Nations Children’s Fund (Unicef) said many vulnerable people were currently on the move, citing statistics from Serbia and Macedonia which suggest that about one-third of refugees and migrants crossing the region now are children, compared to around one-quarter at the end of last year.

“The recent sub-zero temperatures and sometimes snowy conditions are exacerbating the children’s poor physical condition, as many children on the move do not have adequate clothing, or access to age-appropriate nutrition,” Unicef said.

“This has been worsened by the lack of shelter and inadequate heating in some reception centres, as well as buses and trains.”

They showed The Irish Times photographs of one migrant’s blackened toes, which they said would almost certainly have to be amputated. The sufferer had refused hospital treatment however, and insisted on immediately continuing the journey north.