Windsors long ago gave birth to a unique brand

If the royal family did not already exist, it might have to be invented 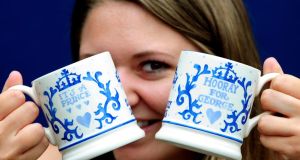 Rachel West holds two commemorative royal baby mugs as they go into production at the Emma Bridgewater Factory in Stoke On Trent, to celebrate the birth of Prince George of Cambridge. Photograph: Rui Vieira/PA Wire

Robert Brenchley was born in Edinburgh Royal Infirmary a few minutes after George Alexander Louis Windsor and all he will get for his trouble is a silver coin.

In celebration of the royal birth on Monday, the Royal Mint said it would give a coin, dated 2013, to every child born on the same day, coming in a blue pouch for boys and pink for girls.

Keeping up with changing times, the mint, now making coinage for 1,000 years, has asked parents to upload a scanned copy of their new arrival’s birth certificate to its Facebook page within 60 days.

Named after a deceased grandfather, Robert Brenchley, besides matching the heir to the throne on time, nearly did so on weight as well, coming in just two ounces behind the 8lbs 6 ounces recorded by the future king.

His mother, Ami, from Currie in Midlothian and who works for Lloyds, is a royal fan, telling the Herald: “I love Kate and her fashion – she’s gorgeous.” Even during her 31-hour labour, when she could have been forgiven for becoming a little self-centred, she chatted about Kate’s impending delivery with nurses.

Scottish reaction
However, Ami Brenchley, while far from being alone north of the Border in her attitudes to the royals, does not reflect the views of all, where some have bridled at First Minister Alex Salmond’s response to the birth of George.

“I am sure that people across Scotland will be absolutely thrilled to hear the news of the birth of a baby boy to the royal couple,” he said.

Not all of his people in the Scottish National Party were, frankly; but Salmond would have been churlish if he had said anything less, and nor can he afford to annoy those who were delighted.

For now, the BBC is having to defend itself in the face of charges that it lost the run of itself, with blow-by-blow reporting from outside St Mary’s Hospital even though nothing was happening.

The complaints, said the corporation, had come “from viewers who feel there has been too much coverage of the story and also from some who feel that the coverage has been biased”. However, millions watched it, and stayed with it during every turn. ITV, for example, reported that its lengthy broadcast was watched by nearly 8 million viewers.

If anything, the coverage abroad was even more gushing, with US TV network presenters giddy with excitement from their broadcasting points outside Buckingham Palace.

The last few days have, once more, raised questions about the cost of the British monarchy and whether that cost is justified, particularly in a time of austerity.

However, the Windsors are in a better position to head off criticisms, following headline-grabbing celebrations to mark the queen’s jubilee and coronation.

Equally, the queen has been shrewd enough to show herself in tune with today’s zeitgeist occasionally, as witnessed by her contribution to the Bond sequence in last year’s Olympics opening ceremony.

In truth, some of the pace has gone out of the attacks on the royals, judging by a series of opinion polls that all show the monarchy is more popular now than it has been for years.

The royals cost £33 million (€38.2 million) last year, according to the Treasury – 53p per head of the population of the United Kingdom, Buckingham Palace notes, adding that this is down by a quarter since 2008/09.

But some British republicans – those so-called because they want to end the monarchy, not anything else – insist that this headline figure is a gross underestimation.

Factor in everything such as security costs and bills for preparing royal visits, says the organisation Republic, and the real tally comes closer to £200 million (€231.6 million).

The difficulty in making a decision about the royals’ worth based on money is that many of the benefits the institution offers – the sense of timeless history, for example – are intangible.

The wedding of Prince William and Kate Middleton two years ago was worth £107 million (€123.9 million) to London alone, through hotel bills, travel and night-life spending, according to some estimates afterwards, even allowing for the costs for those who mitched off work.

Versailles
Intangibles, even if they are hard to count, matter: so much of Britain’s international image is made up of Buckingham Palace, Beefeaters and the Tower of London and other royal-related attractions.

Opponents argue that Versailles – one of France’s biggest tourist attractions – is no less attractive because it is no longer the home of the Bourbons.

However, the thousands from all nations who gather, even for just long enough to have a photograph taken, outside Buckingham Palace every day come rain or shine, would disagree.

In the end, the arrival of a baby to a couple in a country of 60 million people that is no longer an imperial power dominated headlines from Toronto to Timbuctoo to Tokyo.

If the royal family did not exist, branding experts would, in this era of celebrity, seek to invent them; though the patina of history that makes it work most of the time would be impossible to replicate.