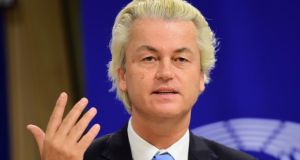 Dutch right-wing politician Geert Wilders described the mass migration from the war zones of the Middle East to the European Union as “an Islamic invasion” that threatens Europe’s prosperity, security, culture and identity.

Mr Wilders was speaking during a parliamentary debate following Wednesday’s revelation by the president of the European Commission, Jean-Claude Juncker, that the Netherlands would be expected to accept 7,214 refugees on top of the 2,047 it has already agreed to take.

Several EU countries oppose the principle of mandatory quotas supported by German chancellor Angela Merkel, and the Liberal-Labour coalition of prime minister Mark Rutte has said it is willing to increase the numbers to whom the Netherlands offers shelter only if all EU countries agree.

Mr Wilders, whose Freedom Party is neck-and-neck with Mr Rutte’s Liberals in the opinion polls, said the influx of refugees from war-torn countries was being used as cover by economic migrants from elsewhere who faced no threat. “Turkey, Greece, Macedonia and Serbia are safe countries. If you are trying to escape them you are doing it because you want European social-welfare benefits and a house.”

The result, he said, was “thousands of young men in their 20s, with beards, chanting ‘Allahu Akbar’, as they move across Europe”.

That was tantamount to “an Islamic invasion of Europe, of the Netherlands”, he said, which “threatens our prosperity, our security, our culture, and even our identity”.

He challenged Mr Rutte directly across the parliament chamber, saying: “Stop building refugee centres. Stand up for your own people, your own culture.”

He then added a personal dig at the Freedom Party leader: “In any case, which is worse, a man with a beard . . . or a guy with dyed hair?”

Mr Rutte said the Netherlands would press ahead at a meeting of justice ministers in Brussels, on Monday, with a proposal that refugees should be registered as close as possible to their native countries before being sent on to Europe, despite EU High Representative for Foreign Policy Federica Mogherini saying the plan was “unrealistic”.

The outline suggests agreement should be reached between the EU and a number of unspecified “safe” Middle East countries to which refugees could first present themselves for registration before being given residence permits for specific EU countries.

Ms Mogherini said she believed “any attempt to deal with this outside our own borders is simply not going to work”. Reporting centres, she said, would increase the numbers flowing towards countries such as Turkey, Lebanon and Jordan, which had already taken in more than 3.5 million people and which risked being “destabilised”.

Mr Rutte said he believed the Dutch plan would receive considerable backing because “by improving care in safe areas near war zones, refugees will not have to come to Europe.”