Eight editorial staff, one worker, one visitor and two policemen among dead 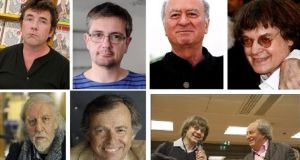 The 12 people killed in the massacre at the Paris offices of satirical magazine Charlie Hebdo on Wednesday include eight editorial staff, one worker, one visitor, one policeman who was on the cartoonists’ security detail and one policeman who shot dead on the street. Below are the names of the victims, as reported by French news outlets.

Publication director Charb had been under protection since his magazine controversially reprinted cartoons of Mohammad in 2006, and his bodyguard was among the dead. A colleague has told Le Monde that the 47-year-old “moved around sometimes without security, which shows he wasn’t worried every second of the day”. Charb was a longtime supporter of the Parti Communiste, and later, the left-wing Front de Gauche. In an interview with Le Monde after the Charlie offices were firebombed in late 2011 he said: “What I’m about to say might be a bit pompous, but I’d prefer to die standing than live on my knees.”

The cartooning doyen, aged 80, was one of the founding members of the Hara-Kiri magazine, a forerunner to Charlie Hebdo, in the 1960s. He believed “humour is the shortest route from one man to another”. Wolinski — “Wolin” to his friends — was also involved in the Charlie Monthly project, and was editor in chief from 1970 to 1981. He was fond of drawing characters announcing to one another: “Sir, I am all for freedom of the press, as long as the press doesn’t take advantage of that by saying whatever it feels like!” His daughter Elsa Wolinski took to Instagram to share a photograph of what is believed to be her father’s study, a pencil on a white page taking pride of place on a desk. “Papa est parti pas Wolinski,” she wrote — “Dad is gone, but not Wolinski.” She followed it this morning with a photograph of Maryse Wolinski, with the caption: “A widow for freedom”.

Tignous (57) was a regular contributor to Charlie Hebdo. Commenting on his work in 2011, he said: “A news cartoon is extremely hard to get right, because you have to get everything into a single image. It’s the total opposite of a comic book.” His friends yesterday paid tribute to Tignous’ ‘bon vivant’ spirit, and recalled his own words: “There are two things I really know how to do: friendship and drawing.”

Killed a week shy of his 77th birthday, Cabut has been widely remembered as a bespectacled giant of the French cartooning world. Cabut’s work was first published at the age of 16. He moved to Paris to pursue his artistic studies at the Ecole Estienne, and later served in the military in Algeria. Michel Polac wrote of him in 2008: “Cabu draws like others breathe.”

Political caricaturist Honore was reportedly the fifth Charlie Hebdo cartoonist to be killed in the attack. It was his drawing, depicting Isis leader Abu Bakr al-Baghdadi offering his best wishes for the new year — “and especially good health!” — that was the last ever published on Charlie’s Twitter account just moments before the massacre. Local media have reported Honore was not killed immediately but succumbed to his injuries after the attack. Born in 1941, Honore was a self-taught cartoonist who was first published at the age of 16 in the newspaper Sud-Ouest. He had been involved in Charlie since 1992.

An author and economist, born in Toulouse in 1946, Maris was best known to Charlie readers as “Uncle Bernard”. He wrote for Marianne, Le Figaro Magazine, Le Monde and L’Obs and was a regular on France Inter. He was the son-in-law of French wartime author Maurice Genevoix and a former president of the Association de Je Me Souviens de Ceux de 14, a group set up in memory of Genevoix and his best-known work, about the 1914 Battle of the Marne. In a statement today, the Association paid tribute to Mr Maris’ humanism, his unique outlook on man and nature, and his “singular voice”.

Renaud was one of two founders of the biennial Carnet de Voyage in Clermont-Ferrand. Those he worked with at the festival are “in mourning”, according to a statement on its website. France Bleu in Auvergne has reported Mr Renaud had gone to visit Charlie Hebdo’s offices with another member of his organisation, Gerard Gaillard, who survived the gunfire. According to France Bleu, the pair had come to visit Jean Cabut, who was a guest of honour at last year’s event.

The psychiatrist and psychoanalyst was the only woman killed in the massacre. She wrote a twice-monthly column for Charlie Hebdo entitled “Charlie Divan” — “Couch” — and published essays on relations between men and women and sexuality.

Mr Boisseau had worked for French catering and site facilities company Sodexo for 15 years. He was reportedly a 42-year-old father-of two. “All of us share the belief that it is intolerable that one of our colleagues has lost his life in such tragic and injust circumstances, and for a cause so contrary to our values,” Sodexo group director-general Michel Landel said in a statement on the company’s website.

Police officer from Paris, widely described by local media as a married man and a Muslim. Graphic footage surfaced in the hours after the massacre of him lying injured on a pavement and apparently raising his arms in defence before one of the gunmen behind the attack shot him dead.

A 49-year-old police officer was attached to the Service de Protection des Hautes Personnalites and was tasked with Charb’s personal protection. He is survived by his wife Ingrid Brinsolaro, the editor in chief of the Normandy weekly newspaper L’Eveil Normand. “The free press are in mourning; L’Eveil Normand is in mourning,” the newspaper said in a statement on its website. “We are crushed, and very sad. Our thoughts are with this family, which is so close to us, and has been destroyed by this horror.”