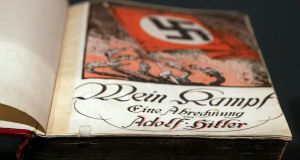 It sounds like a remake of the Mel Brooks’s farce The Producers, but set in the publishing world. A group of historians republish Mein Kampf in Germany for the first time in 70 years and look on – first with pride, then with alarm – as the book sails to the top of Germany’s book charts.

“We couldn’t have imagined it would be this successful and are delighted, because it is an edition that is meant for all,” he said. “But some people have no end of difficulty with it because Mein Kampf is, in many ways, a relic from the Third Reich.”

During Hitler’s lifetime Mein Kampf, a two-volume hybrid of memoir and political rant, sold 12 million copies in 18 languages. But after his suicide in in 1945, this Nazi relic was effectively banned in Germany.

With no heirs, Hitler’s German-language copyright was transferred to the Bavarian state government in Munich. It put the book in its poison cupboard and refused to issue publication licences. Bavaria had no influence on the trade in second-hand editions, e-book versions or English and other foreign language editions.

As Bavaria’s copyright on Mein Kampf neared its end last January, seven decades after the author’s death, Dr Hartmann of Munich’s Institute for Contemporary History won approval for a team of historians to produce a scholarly edition. Their ambition was to demystify the book and, with research and reason, take apart the dictator’s rants. They also hoped to pre-empt any neo-Nazi groups producing tribute editions.

The critical edition’s first print run of 5,000 copies sold out immediately – a surprise given the heavy, two-volume work costs €59. As it enters its sixth edition, does Dr Hartmann feel congratulations or commiserations are in order?

The historian laughs nervously. He operates in the elitist world of German academia, where too much popular success can ruin a professional reputation.

“The humanities are not normally showered with public attention, which makes some people suspicious of success, particularly of our project,” said Dr Hartmann. “But I hate an elitist approach to knowledge, I find it extremely undemocratic – particularly knowledge financed by public money.”

Dr Hartmann says his institute will make no profit from the book. Decontaminating the dictator’s poison took years of work; the €59 purchase price only covers the research, publishing and warehouse costs.

The man behind the success of Mein Kampf has one regret – and it’s not bringing Hitler back to the bestseller lists. The project almost failed because Bavarian politicians pulled their funding. But the critical edition of Mein Kampf struggled on with other financing.

“It is rather strange but we’ve heard nothing at all from the Bavarian state,” said Dr Hartmann. “For those people we solved a big problem.”