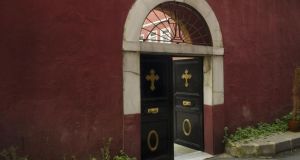 In the Karakoy quarter of bustling Istanbul, Christian crosses abruptly appear on window frames along an aged red brick wall. At first glance there are few signs of a Christian presence in the area; instead the narrow streets are replete with electrical shops.

It’s not until one sees a cluster of cross-topped domes viewed from a nearby rooftop that Karakoy’s importance to Istanbul’s Christians becomes clear.

A treasure trove of chapels and churches makes Karakoy one of this ancient city’s most important Christian districts. But a government-led drive to rejuvenate the area may see this tiny population lose out.

Karakoy has long been known as a run-down market area where all the trappings of a traditional port neighbourhood can be found.

But as happens around the world, young artists and students began moving in three years ago to avail of cheap rent and were followed swiftly by artsy cafes and bars, and then property developers seeking to buy whole blocks on the cheap.

Today Karakoy finds itself finely balanced between times past and future, a place where craft shops and bars are interspaced by residential buildings fit only to be knocked.

A gaping construction space in the centre of the district illustrates the direction Turkey’s ruling Justice and Development Party and many business-minded Turks want this country to go: on an all-out modernisation drive. Plans to update the port through a massive renovation project are in the works.

It has been the Turkish government, led by conservative prime minister Recep Tayyip Erdogan that has facilitated the destruction of numerous historical if run-down buildings and districts in Istanbul to make way for malls, modern apartment complexes and money.

And Istanbul’s churches are seemingly no obstacle.

Earlier this month the Russian Orthodox chapel of St Elias was opened for Mass for the first time in 40 years. About two dozen worshippers attended the service but the unavailability of priests to keep it open means it may close again soon.

Members of the chapel’s foundation say it needs $50,000 to restore frescos and icons, and are also troubled by the potential sale of the building it occupies, deemed possible as the building is not officially listed as housing any religious sites.

Down the street, St Pantaleon’s, a Russian Orthodox monastery named after the fourth-century martyr, is located up five flights of stairs past a busy construction crew and family homes. Inside a bolted door, Russian-speaking Fr Dimitrios has been taking care of the church for 13 years.

Three other churches – St Mary’s, St John’s and St Nikola’s – in varying states of decline are all located a few score metres away. Centuries ago these buildings served as rest stops for pilgrims headed to Mount Athos in Greece or to Jerusalem. But on a recent visit to the churches and chapels in Karakoy, five of six visited were locked, open only for a couple of hours on Sundays.

In a region where religious minorities have come under threat, particularly in recent years, the remaining Christians of Karakoy feel much uncertainty in light of the development plans.

“There are a lot of questions being asked about what will happen to the churches and schools, a lot of gossip that they will be moved somewhere else,” said Murat Yagan, an Armenian Christian jeweller sitting drinking beer with friends outside the St Gregor the Illuminator Church.

“But I don’t have any fear of the community being kicked out of the area.”

Eva Sarlak, a professor at Isik University in Istanbul, says that although Karakoy is an important area for Turkey’s Christians, its regeneration may not necessarily spell doom for its churches. “A big project like Galataport gives an opportunity for big finances for the area; in any case, these churches are protected by heritage organisations. There could be benefits for the community,” she said.

Galataport is the name given to the project expected to develop the port and wider district into an international tourism centre.

Some $700 million is to be spent on a facility incorporating malls and offices, and will “add to Istanbul’s brand value amid its Olympic bid”, according to Husnu Akhan, chief executive of Dogus Holding which is set to operate the new facility.

As a result, the value of the land on which the ancient churches sit is likely to skyrocket, forcing out the local Christian community and others while construction plans show it would come within a single block of the centuries-old churches. Already, the hulls of massive cruise liners fill the southern skyline – welcomed by local business owners and city authorities as an important source of tourist money.

“We have nothing to do with the project; we are only spectators in front of God and everything is up to God,” said Fr Dimitrios of the rooftop Russian Orthodox monastery.

“Everything passes some way or another, other than God.”