Turkish police use tear gas and water cannon against protesters 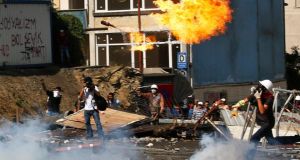 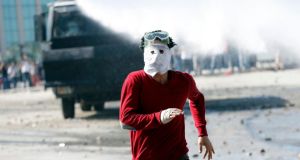 A protester runs as a crowd control vehicle fires a water cannon during a protest at Taksim Square in Istanbul today. Photograph: REUTERS/Murad Sezer 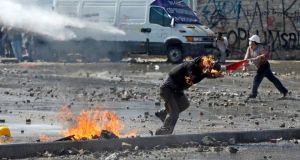 A protester catches fire as the throws a petrol bomb at riot police during a protest at Taksim Square in Istanbul today. Photograph: REUTERS/Murad Sezer 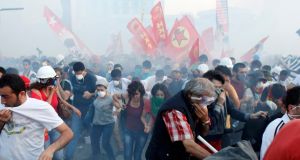 Police had been confronted by jeering protesters banging drums and demanding the resignation of prime minister Tayyip Erdogan.

Protesters pelted water cannon vehicles with stones and ambulances were later seen moving in and out of the square.

Mr Erdogan had earlier called on protesters to stay out of Taksim, the centre of more than a week of demonstrations that have divided the country he has dominated for a decade.

In an indication of the impact of the protests on investor confidence, the central bank said it would intervene if needed to support the Turkish lira.

Mr Erdogan, who denies accusations of authoritarian behaviour, declared he would not yield.

“They say the prime minister is rough. So what was going to happen here? Were we going to kneel down in front of these (people)?” Mr Erdogan said as action to clear the square began.

“If you call this roughness, I’m sorry, but this Tayyip Erdogan won’t change,” he told a meeting of his AK party’s parliamentary group.

Western allies have expressed concern about the troubles in a key Nato ally bordering Syria, Iraq and Iran. Washington has held up Mr Erdogan’s Turkey as an example of an Islamic democracy that could be emulated elsewhere in the Middle East.

Police backed by armoured vehicles moved unexpectedly, soon after dawn, into Taksim, site of an initial protest against government plans to build on Gezi Park, which abuts the square.

His critics, who say conservative religious elements have won out over centrists in his AK party, accuse him of inflaming the crisis with unyielding talk.

“A comprehensive attack against Turkey has been carried out,” Mr Erdogan said.

“The increase in interest rates, the fall in the stock markets, the deterioration in the investment environment, the intimidation of investors - the efforts to distort Turkey’s image have been put in place as a systematic project,” he said.

Thousands packed into Gezi Park, now a ramshackle settlement of tents at the edge of the square; among their number leftists, environmentalists, liberals, students and professionals who see the development plan as symptomatic of overbearing government.

Despite the street protests against Mr Erdogan, he remains unrivalled as a leader in his AK party, in parliament and on the streets.

The unrest has knocked investor confidence in a country that has boomed under Mr Erdogan. The lira currency, already suffering from wider market turmoil, fell to its weakest level against its dollar/euro basket since October 2011.

The cost of insuring Turkish debt against default rose to its highest in ten months, although it remained far from crisis levels.

The police move came a day after Mr Erdogan agreed to meet protest leaders involved in the initial demonstrations over development of the square.

“I invite all demonstrators, all protesters, to see the big picture and the game that is being played,” Mr Erdogan said.

“The ones who are sincere should withdraw ... and I expect this from them as their prime minister.”

Police removed huge banners hung by protesters from a building overlooking Taksim but the local governor said they had no intention of breaking up a protest on Gezi Park itself. Riot police moved into the park briefly, then withdrew.

Hundreds of protesters, many wearing face masks and hard hats, gathered on steps leading from the square to the park.

Police hung a single Turkish flag and picture of the founder of the Turkish secular state, Mustafa Kemal Ataturk, from the building.

Protesters accuse Erdogan of authoritarian rule and some suspect him of ambitions to replace the secular republic with an Islamic order - something Mr Erdogan denies.

“This movement won’t end here. We’ve started something much bigger than this park ... After this, I don’t think people will go back to being afraid of this government or any government,” said student Seyyit Cikmen (19), as the crowd chanted ’Every place is Taksim, every place resistance’.

Police appealed to the protesters not to throw rocks, calling from loudspeakers: “Dear Gezi friends. We are unhappy with this situation. We don’t want to intervene. We don’t want to harm you. Please withdraw.”

Turkey’s Medical Association said that as of late yesterday, 4,947 people had sought treatment in hospitals and voluntary infirmaries for injuries, ranging from cuts and burns to breathing difficulties from tear gas inhalation, since the unrest began more than ten days ago.

Three people have died. Erdogan has repeatedly dismissed the protesters as “riff-raff”.

But deputy prime minister Bulent Arinc said leaders of the Gezi Park Platform group had asked to meet him and Erdogan had agreed. A meeting is expected tomorrow.