Turkey to release 38,000 prisoners to make space in jails 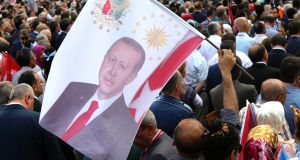 A man holds a flag with the portrait of Turkey president Recep Tayyip Erdogan in Ankara on Sunday. Photograph: Adem Altan/AFP/Getty Images

Turkey will release 38,000 prisoners under a penal reform announced on Wednesday after the arrest of tens of thousands of people suspected of links to last month’s attempted coup added to pressure on overstretched jails.

The reform was one of a series of measures outlined on Wednesday in two new decrees under a state of emergency declared after the July 15th failed putsch during which 240 people, mostly civilians, were killed. The government gave no reason for the reform.

Western allies worry President Recep Tayyip Erdogan, accused by opponents of creeping authoritarianism, is using the crackdown to target dissent, testing relations with a key Nato partner in the war on Islamic State.

Angrily dismissing the West’s concerns, Turkish officials say they are rooting out a serious internal threat from followers of a US-based cleric Ankara blames for orchestrating a coup bid.

Those dismissed were described as having links to cleric Fethullah Gulen, a former ally turned enemy whom Mr Erdogan says is behind the attempt by rogue troops using tanks and jets to overthrow the government. Mr Gulen denies involvement in the coup.

“This measure is not an amnesty,” justice minister Bekir Bozdag wrote on Twitter of the penal reform. “Around 38,000 people will be released from . . . jail in the first stage as a result of this measure.”

He did not say why the reform was needed but Turkey’s prison population has trebled over the last 15 years. There were 188,000 prisoners in Turkey as of March, some 8,000 more than the existing capacity.

Another measure gave the president more choice in appointing the head of the armed forces. He can now select any general as military chief, one decree said. Previously only the heads of the army, navy or air force could be promoted to the post.

A telecoms authority will also be closed under the moves.

Mr Erdogan, already accused by critics of creeping authoritarianism before the coup bid, says Mr Gulen and his followers infiltrated government institutions to create a “parallel state” in an attempt to take over the country.

Alongside tens of thousands of civil servants suspended or dismissed, more than 35,000 people have been detained in the purge. Judges, journalists, police, and teachers are among those targeted for suspected links to Mr Gulen’s movement.

Turkish police on Tuesday searched the offices of a nationwide retail chain and a healthcare and technology company, detaining executives who authorities accuse of helping finance Mr Gulen’s network.

The 11-month investigation focused on alleged wrongdoing by the Gulen movement from 2013, but includes charges Mr Gulen organised an armed “terrorist” group to topple the government, scrap the constitution and murder Mr Erdogan on July 15th.

The 2,257-page indictment seeks two life sentences and an additional 1,900 years in jail for Mr Gulen, plus tens of millions of lira in fines, Anadolu said. It names a total 111 defendants, including 13 people who are already in custody.

US officials have been cautious on the extradition of Mr Gulen, saying they need clear evidence. He has lived in self-imposed exile in Pennsylvania since 1999, but it is not clear whether Ankara has yet made a formal request.

In another tense exchange, Turkey lashed out at Germany on Wednesday, saying allegations in a media report that Turkey had become a hub for Islamist groups reflected a “twisted mentality” that tried to target Mr Erdogan.